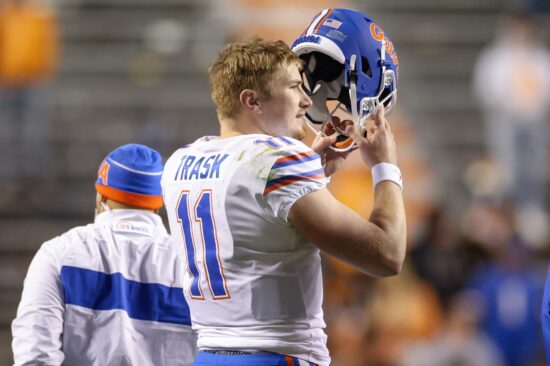 The 8-2 Florida Gators’ potential for a trip to the college football playoff is on life support after losing 37-34 to LSU last week.

UF could still turn a few committee heads if they are able to get a dominating win over the Alabama Crimson Tide in the SEC Championship Game. Of course, that’s easier said than done vs. a 10-0 Crimson Tide squad that is simply rolling through opponents.

It seems like the only hope for Florida in Saturday’s tilt is if Alabama gets complacent knowing they’ll likely make the playoff even with a loss. The only problem with that wish is that this is a Crimson Tide that has shown virtually no weakness this entire season, and have been winning games by double digits even on what could be considered ‘bad’ days.

Alabama comes into Saturday’s meeting off of a 52-3 shellacking of Arkansas last week as -28 point favorites. Oddsmakers keep raising the number, and it’s still not enough as the Crimson Tide have covered the spread in the last six games all as at least -21 point favorites. A great offense has something to due with Alabama’s success ATS, but this defense has also allowed a total of 36 points the last five games.

About that offense though. Mac Jones is completing a ridiculous 76.4% of his passes this season, and has tossed 27 TD to just 3 INT. Jones wasn’t really needed last week as Alabama took a 38-3 halftime lead against Arkansas, but he had 9 TD to 0 INT the two games prior in wins over LSU and Auburn.

Florida Ready to Hang in a Shootout?

Last week was another good showing for the Florida offense, putting up at least 31 points for their 10th straight game this season. The Gators were sacked 4 times though, lost a fumble, and Kyle Trask threw an uncharacteristic 2 INT. Trask had 16 TD to 0 INT the last four games coming into the meeting with LSU.

It’s possible that Florida got caught in the ‘look-ahead’ game last week vs. LSU, knowing their ticket to the SEC Championship was already punched. The Gators were -24 point favorites against the defending national champions, but their shot at the postseason is all but gone even with a win over Alabama as +17 point underdogs on Saturday night.

Florida does have the offense to hang in this one, as despite his INTs Trask still threw for 474 yards last week vs. LSU. Alabama has played great defense lately, but this is still a team that had to withstand Ole Miss 63-48 earlier in the season. Ole Miss QB Matt Corral threw for 365 in that game and the Rebels had two RBs go over 120 yards on the ground. That was way back on October 10th though.

Despite their loss last week, Florida is still ranked #7 in the country so getting +17 points may seem like a lot. For Alabama backers, that number seems light as this team is on a mission right now.