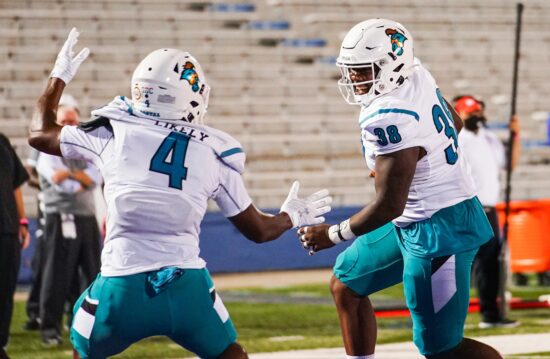 Two of the more unlikely ranked opponents meet up on Saturday when the #19 UL-Lafayette Ragin’ Cajuns meet the #12 Coastal Carolina Chanticleers.

Coastal Carolina can go to 12-0 with a win in the Sun Belt Championship Game, which is being held at Brooks Stadium in South Carolina – home of the Chanticleers.

It’s always tough heading into a matchup with an undefeated team, but the Ragin’ Cajuns after battling to a 30-27 loss to Coastal Carolina earlier in the season. Back then oddsmakers didn’t know how special of a season either team was going to have, and UL-Lafayette was actually a whopping -9 point home favorite in that earlier matchup.

UL-Lafayette has also had success in their only previous trip to Brooks Stadium, a 48-7 win in 2019 but as -14 point favorites. Coastal Carolina has taken two of three in the all-time series, including a 30-28 win in 2018. The Ragin’ Cajuns have also had an extra week to prepare for this game, as they haven’t played since escaping with 24-21 win at 8-3 Appalachian State.

It will be interesting to see how the ULL offense fares on Saturday. The Ragin’ Cajuns put up a combined 108 points in two wins prior to their game against Appalachian State last week, but Coastal Carolina also limited BYU’s top 10 offense to just 17 points in a win two weeks ago.

Time to Put a Bow on This One for Chanticleers

Win or lose, it’s been a program-revolutionizing season for Coastal Carolina and head coach Jamey Chadwell and a huge turnaround for a team that was just 5-7 last season. Louisiana-Lafayette earned their signature win right out of the gates with a 31-14 victory over Iowa State in the season opener, but the Chanticleers did the same two weeks ago in the 22-17 win over BYU.

The Cougars came into that game 10-0, but left the visit to South Carolina demoralized in a 22-17 Chanticellers win as +10 point home underdogs. BYU’s NFL-bound quarterback Zach Wilson finished with just 240 yards with 1 TD and 1 INT.

BYU has a top 10 defense as well, and Coastal Carolina was able to get 132 yards on the ground from CJ Marable, their star RB who has 7 TDs in the last three games. Marable was held to 73 yards in the first meeting with ULL, but did score a TD. One big advantage Coastal Carolina has is that their QB Grayson McCall doesn’t turn the ball over, throwing his first INT in the last 7 games (to go with 3 TDs) last week in the win over Troy.

Coastal Carolina knows what’s at stake and gets to play the Sun Belt Championship Game in front of their home fans, albeit limited. UL-Lafayette has a great chance to play spoiler though, and has also had an extra week to prepare. This feels like a field goal game.