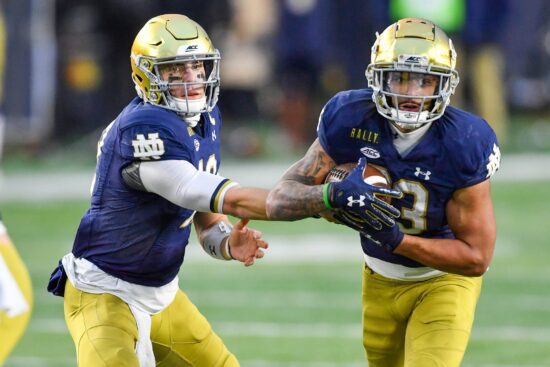 It’s the ACC Championship game, but Saturday night’s tilt between the Notre Dame Fighting Irish and Clemson Tigers is also basically a play-in game for the College Football Playoffs.

10-0 Notre Dame handed 9-1 Clemson their only loss of the season 47-40 in OT in South Bend in week 10, but the Tigers also didn’t have their outstanding QB Trevor Lawrence in that matchup.

Tigers Ready to Punch Their Ticket?

Notre Dame could conceivably still make the playoff with a loss, but it will be hard for the committee to put in a 9-2 Clemson team ahead of a one-loss Texas A&M squad. That makes Saturday night’s tilt a must-win if Clemson wants to make their 4th national championship appearance in the last five years.

The Tigers did lose that first meeting with the Irish, but that game was also in South Bend compared to neutral site Bank of America Stadium in Charlotte where the ACC Championship Game is being held. Notre Dame scored with 0:22 left to force OT, so that was a very winnable game for Clemson. Plus, DJ Uiagalelei threw for 439 yards vs. ND in just his second career start.

Clemson has their big dog back for Saturday’s rematch, as Trevor Lawrence had to sit out the first meeting with a positive COVID test. Lawrence has led Clemson to 52 and 45 points in the two games since his return, and is very experienced in these types of high-pressure games after leading Clemson to two National Championship berths the last two years.

Notre Dame Playing With a Chip On Their Shoulder

It’s not too often you see a 10-0 team as a +10 point underdog but that’s the situation the Fighting Irish are in heading into Saturday night’s showdown. That’s a lot of points for the ACC’s #3 offense and #2 defense, but of course Clemson ranks #2 and #1 in those categories respectively.

Will we get the high scoring affair that would be expected between a Clemson squad averaging 46.0 ppg and a Notre Dame team putting up 37.7 ppg? One thing going for Notre Dame is confidence from holding the conference’s #1 offense, North Carolina, in check during a 31-17 win in week 13. The Tar Heels had just 211 yards through the air and a meager 87 on the ground.

Lawrence has gone 33-1 in his career at Clemson, but Fighting Irish QB Ian Book is a winner as well, posting a 30-3 during his time in South Bend. Book doesn’t have a 300-yard game since throwing for 310 in the first meeting against Clemson, but he does have 7 TD passes in the three wins since that epic tilt. The Fighting Irish also feature a 1,000 yard rusher in Kyren Williams (1011), a possible X-factor in this duel.

Lawrence is a winner, but 10 points is a lot to give to a Notre Dame squad that is undefeated on the season and features one of the best offensive lines in college football. We could be looking at another game decided in OT.