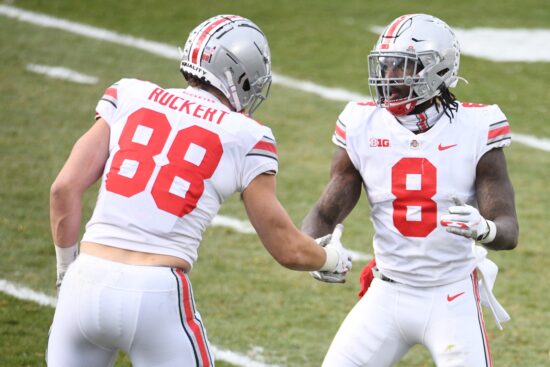 The Buckeyes have been all over the news this past week as they did not meet the Big Ten’s initial requirements of having 6 wins in order to play in the Big Ten title game. However, the Big Ten announced this week, to many people’s anger, that they would be changing the rules to allow Ohio State to in fact play in the title game because they still won their division.

Now whether or not this is because Ohio State won their division of the conference or it’s really because the Big Ten knows this team is their only shot to make the College Football Playoff is neither here nor there. Regardless, this team is currently in the playoff and needs a win against Northwestern to cement that holding.

Ohio State has only looked human once this year, and that came against #9 Indiana.

Justin Fields threw two first half interceptions but the Buckeyes still maintained a multiple touchdown advantage throughout most of the game until the closing minutes of the fourth quarter where they almost let up their lead to the Hoosiers and ended up winning by just a single touchdown. All other games their margin of victory has been at least 13 points as the offense is averaging over 45 points a game and the defense giving up just 23.

The Buckeye offensive attack is incredibly balanced as they have the means to score on the ground and air depending on what is shown to them by the defense. The only thing I see susceptible is their offensive line. They showed that against a decent pass rush like Indiana’s even Fields could not scramble away and keep plays alive with his legs. Something to look at against a great Northwestern front.

Like I just said, Northwestern is identified by their defense. This unit has only given up over 20 points once in their entire season. This came against Michigan State where the Spartans somehow came out on top with a 29-20 win crushing the Wildcats playoff hopes. However this game was not so much about the defense giving up points, but the offense not being able to score. The Wildcats average just putting up 25 points a game which is why in four of their six wins, they only won the game by at most 10 points and clearly cannot come back from a deficit as shown by the Michigan State loss.

Ohio State is favored by 20.5 in this one and they will win, but they won’t cover. Have faith in the Wildcats defense to at least keep this one close as they love to cause turnovers and will keep Fields contained.

Ultimately any defense gets worn down enough if the opposing offense is good enough, which is why Ohio State will win this one as I don’t think the Wildcats could come back from anything greater than a 14 point deficit, but I don’t think it will be a blowout.