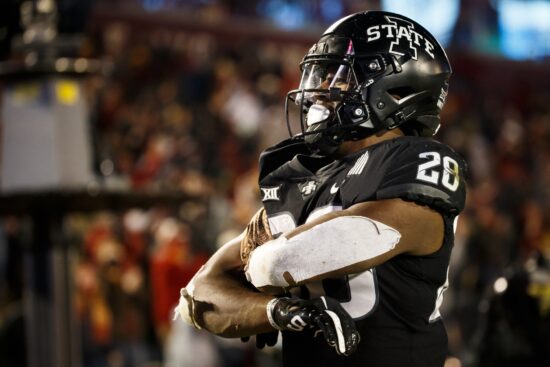 The Iowa State Cyclones are back in the Big 12 championship after a dismal 0-1 start to the year, losing to the Louisiana Lafayette Cyclones by 17 points at home. However, this team has bounced back as winners of seven out of their last eight and thanks to some help from teams like Oklahoma State losing, they are contending for not just the Big 12 title but also a spot in the College Football Playoff.

Meanwhile, the other high scoring offense of Oklahoma comes into this game looking to avenge its loss they suffered against Iowa State already back in October.

The Sooners, like the Cyclones, needed some other teams in the Big 12 to take a dive after they had an embarrassing home loss against Kansas State and those teams did. We got ourselves a heck of a game coming this Saturday.

If you have watched any sort of college football news or highlights this year, odds are Iowa State’s Breece Hall has been talked about or one of his runs shown. The running back is a monster with over 1300 yards on the ground and 17 touchdowns to his name just rushing alone. He’s the reason the Cyclones are putting up 199 yards on the ground on average.

Complimenting Hall has been the steady play of Quarterback Brock Purdy who has thrown for over 2,200 yards and 17 touchdowns on the year. He also has the ability to escape the pocket and keep plays alive or be used in a read option type of offense because the respect for Hall’s ability to run is so high. The Cyclones defense is no joke either despite the negative stigma of defenses in the Big 12. They give up just over 100 yards on the ground and just 21 points a game.

As for Oklahoma, their quarterback Spencer Rattler had to learn quickly about the difference in college football vs. high school as he had five interceptions through his first three games.

But since then this dual-threat passer has just thrown two, and has over 2,500 yards on the year combined with 24 touchdowns. The Sooners’ offense as a whole is putting up an insane 43 points a game while holding opponents to just 22 a game, something they had struggled with tremendously in the past with most of their games being won in a shootout.

Despite the play of Rattler down the stretch of the season, I am still going with Iowa State to take this one. The Cyclones are rolling through teams right now and have everything to play for. They also possess a running game and have the ability to slow it down if need be to keep Rattler and company off the field if they feel the defense isn’t stopping them.

Furthermore, I don’t trust the true freshman to win this game down the stretch if need be because both their losses have come by one possession. Furthermore they needed double OT to beat an inferior Texas team after being up by 14 points with just five minutes to go in the fourth quarter. Give me the red hot Cyclones in this one.