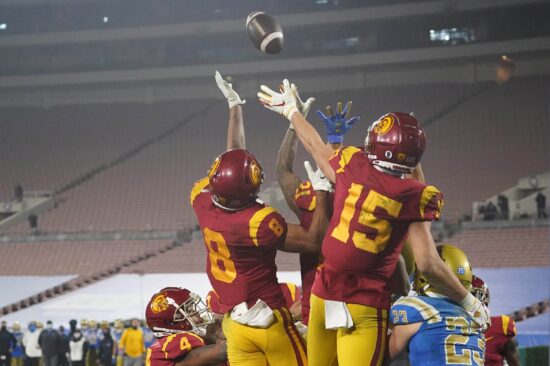 It was announced this week that the #13 Trojans, who originally had planned to play Washington for the Pac-12 title, would now be playing Oregon instead as the Huskies had a coronavirus outbreak within their program.

Now the Ducks who thought all was lost finishing third in the conference, have a chance to end their season on a high note.

As one of the few power five teams making it to their conference championship unscathed by a loss, does USC have a chance at sneaking in the playoff race?

Well judging by their #13 ranking the committee certainly doesn’t think so, which means they not only need to beat Oregon, but beat them soundly in order to boast an undefeated record and a conference championship to show the committee they belong. After all Ohio State is already projected to be in without six wins…

USC is bolstered by its passing attack no doubt about it. Quarterback Kedon Slovis has thrown for 15 touchdowns and 1600 yards in just five games with just four interceptions.

However this team’s defense has been downright shaky this season. At times they have held teams like Utah and Washington State to just 30 points total combined, but gave up 30 to a struggling bottom-tier team like Arizona and 38 to a UCLA team that was about to beat the Trojans if they didn’t leave Slovis so much time on the clock to come back and score to secure the win.

As for Oregon, they have just been downright disappointing this season. In years past, USC was the favorite to win the Pac-12 but they usually get over hyped and lose bad games typically handing the title game spot to the Ducks. Now it appears the roles have flip flopped as Justin Herbert put the Ducks back on the map last year, only to have them lose their last two games of the season. But the football gods handed them a gift in this crazy year and now they have one last shot to redeem themselves.

The Ducks are pass heavy as well with Tyler Shough leading the way, throwing for nearly 1400 yards and 11 touchdowns but they average almost 100 yards more on the ground than the Trojans leading to a more balanced attack. However the Ducks defense has been even worse than the Trojans as they have averaged giving up 4 touchdowns a game this year and not to mention nearly 200 yards on the ground.

It will be interesting to see how this one finishes. Neither team has looked dominant down the stretch of the season and both have defenses that could blow a lead their offenses who both average over 34 points a game setup.

However I still think I will lean with the Trojans in this one. If they face a fourth quarter drive in order to win the game, something that is very likely to happen in this, I put my trust more in Slovis than Shough.

Also I think USC might shock the Ducks and change their gameplan around to try and run a bit more on this porous Ducks defensive front which has proved fatal to them against lesser foes than USC.