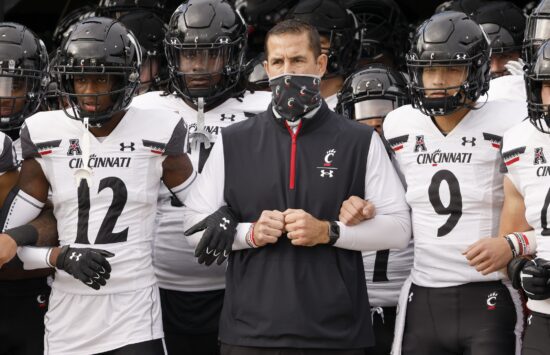 There’s literally nothing more the Cincinnati Bearcats could’ve done this season to get themselves in a position to make the college football playoff.

Even at 8-0, Cincinnati is still ranked just 9th in the nation as they prepare to face the #23 Tulsa Golden Hurricane in the AAC Championship Game on Saturday. Even a victory that pushes them to 9-0 would potentially only move Cincinnati up a slot or two.

Tulsa Has Upset on Their Minds

The Golden Hurricane finally get to play Cincinnati after scheduled games in October and then December were postponed due to COVID issues. There could be an advantage in game planning for the dynamic Bearcats offense for what will be a third time now, especially as defense is a major advantage for Tulsa, who has the AAC Defensive Player of the Year in Zaven Collins.

Tulsa has rattled off six straight wins after a season opening 16-7 loss at Oklahoma State that was still a moral victory as +24 road underdogs. Tulsa also went on the road to UCF in their second game and secured a 34-26 victory as +20.5 underdogs. Most recently, the Golden Hurricane defense dominated again in a 19-6 win over Navy, holding the vaunted Midshipment ground game to 126 yards on 53 carries.

Philip Montgomery may need more from his offense to get the win over Cincinnati however. Starting QB Zach Smith suffered a torso injury two games ago against Tulane, and returned to throw for just 168 yards vs. Navy. Tulsa scores the 4th fewest points in the American Conference.

Cincinnati Ready to Finish the Job

There’s a litany of mid-level teams who have rattled through the season undefeated but have still been denied even the chance to play for a national championship. Cincinnati will add their name to that list with a win on Saturday as -14.5 favorites. The Bearcats will also be playing the AAC Championship Game on their home field at Nippert Stadium, which also gives them an advantage.

Of course the major asset the Bearcats have coming into this game is electric QB Desmond Ridder, just named AAC Offensive Player of the Year the past week. Ridder had 338 yards passing and 2 TD to go with 57 yards on the ground and another two scores to lead the win over UCF in Cincinnati’s last game. Ridder has 16 TD to just 6 INT passing, and has ran for 500+ yards with another 11 TDs.

The only thing that may make Cincinnati backers tread lightly here is that the team hasn’t played in nearly a month, the November 21st win over Central Florida. The Bearcats have had countless games altered or canceled due to COVID, which hasn’t helped their ascension up the rankings either.

Tulsa lost 13-24 last year at Cincinnati as +16 point road underdogs. The Golden Hurricane are getting two TDs on Saturday, and although Tulsa has no offense, the betting total of 45 says this one is likely to be a defensive struggle. Taking the points looks like a good choice.