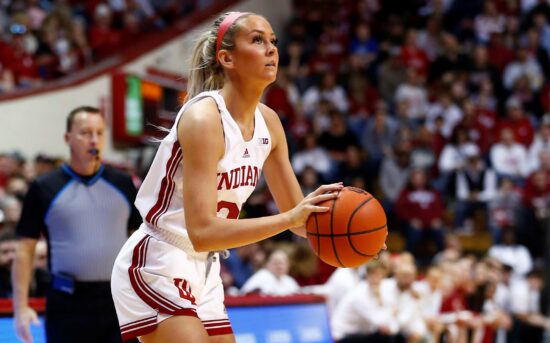 If you’re looking for the best NCAAW predictions for the Ohio State vs Indiana game – look no further! – Vegas Odds has you covered.

This game features a matchup between the 19-1 Buckeyes and the 18-1 Hoosiers. Ohio State lost their 1st game of the season on Monday, falling by 11 points to #10 Iowa at home. The loss raised some concerns for the Buckeyes, who could quell those concerns immediately with a win here. Indiana has now won 6 in a row, picking up three Top 25 wins in that span, including two on the road.

Ohio State saw their 19-game winning streak come to an end on Monday, as they lost for the first time this season. The Buckeyes have benefitted from a surprisingly easy schedule. It wasn’t planned to be that way, but their wins against Tennessee, Louisville, and Oregon are no longer ranked wins, as those teams have vastly underperformed. They did manage to get a couple of Top 25 wins, defeating #13 Michigan and #22 Illinois. Their ability to beat top teams will be put to the test for real in this road game at Indiana.

Indiana continues to impress on a weekly basis. Last week, they matched Ohio St’s best wins against #13 Michigan and #22 Illinois, but did so by larger margins on the road than the Buckeyes managed at home. The Hoosiers also have a blowout win against #15 UNC, as well as a tough loss to 11-9 Michigan St. Indiana has a true WNBA prospect in Mackenzie Holmes, who averages 22 ppg and 8.3 rpg. Holmes ranks 3rd in the NCAA with a 67.3% shooting percentage, and has posted a double-double in 6 of her last 7 games.

The Buckeyes may be currently ranked above Indiana, but if the poll had come out following their loss to Iowa instead of after, they would certainly be ranked lower. Indiana picked up two road wins against ranked teams last week, and looks like one of the nation’s best teams. Ohio State’s record is very impressive, but their loss to Iowa showed some big holes. I like Indiana to win at home here.