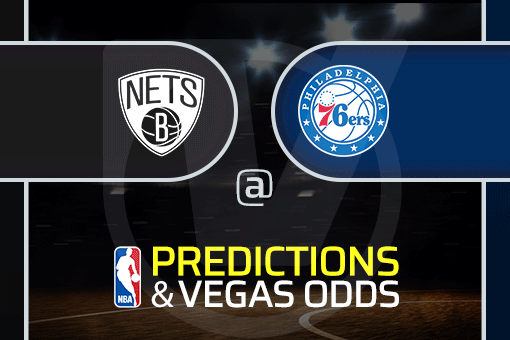 If you’re in search of the latest NBA betting odds and Nets vs 76ers prediction, look no further because Vegas Odds has you covered.

The 76ers defeated the Nets by nine the last time they met, although neither James Harden nor Joel Embiid suited up for Philly.

The Nets have been without Kevin Durant, although he will be re-evaluated in two weeks and could return sometime in February. Still, Brooklyn has won the past two games, and Kyrie Irving has been playing at a high level.

Against the Warriors on Sunday, Irving dropped 38 points on 12-22 from the field and added nine assists and seven rebounds. Nic Claxton continues to impress, and he scored 24 points with 15 rebounds in the four-point win at Golden State.

The Nets trailed at the half, but they engineered an impressive comeback to get the win.

The 76ers have won five in a row and nine of 11 in January to continue their stellar play this year. The 76ers escaped a close one against the Sacramento Kings on Saturday, and Tyrese Maxey led the way with 32 points as Embiid and Harden didn’t suit up.

Both Embiid and Harden played last Thursday against Portland but sat out against Sacramento, so they should be ready to go against the Nets.

Injury reports are always tough to gauge, and Embiid was listed as day-to-day with his foot injury. However, even when these teams met early this season, neither star played, and the 76ers still won — with Kevin Durant in the lineup for Brooklyn.

Tyrese Maxey has been playing well lately, and unless Kyrie Irving drops 50 points, the 76ers get the win with or without Embiid and Harden on the floor.