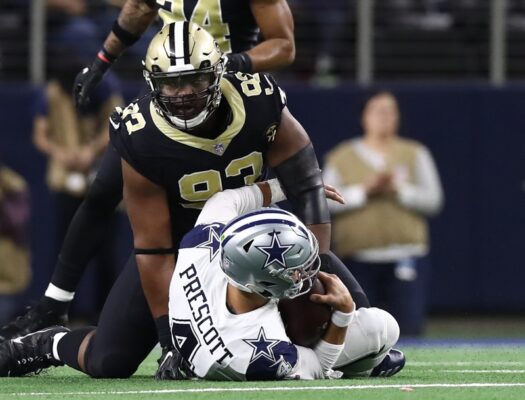 The 2021 NFL season could turn out very challenging for the New Orleans Saints.

Not only will they be playing without Drew Brees as their quarterback for the first time in 15 years, but they will also miss one of their key defensive linemen in the first six games of the season. The man in question is defensive tackle David Onyemata, who will be out of the rooster until the last day of October.

The reason behind this is that the NFL has served Onyemata a six-game ban for testing positive for banned substances. The 28-year-old tackle announced the news on social media, explaining that he never took it knowingly.

This, however, isn’t his first suspension. It was 2019 when Onyemata had to sit out one game after receiving a misdemeanor summons for possession of marijuana. This time, however, it’s not marijuana that’s caused the NFL to act. It’s the use of PED (performance-enhancing drugs) that will make the tackle miss the first six weeks of the season.

His absence is bound to bring trouble to New Orleans, considering that he’s been one of their key defensive players for the past five years. With him in the team, the Saints conceded only 337 points in the 16 games of the 2020 regular season, fewer than 29 other NFL teams.

Onyemata Returns in Time to Face the Super Bowl Winners

The New Orleans Saints 2021 schedule is such that they will have to face some real heavyweights in the early stages of the season. In the opening week, they’re welcoming the Green Bay Packers at Mercedes-Benz Superdome. The Saints are favored to win that game, with the spread currently being set to three points.

The following game will see the Saints travel to Charlotte to face the Carolina Panthers. In Week 3, they’re going to Foxborough to take on the New England Patriots. From there, they return home to host a game against the New York Giants, before traveling to Washington and Seattle in Weeks 5 and 6, respectively.

In all those games, their defense will be without Onyemata, who’s been one of their key men since joining the Saints in 2016. The fact that shows the importance of the defensive tackle is that he’s missed only two regular-season games since arriving in New Orleans from the University of Manitoba.

A silver lining is that Onyemata will make his comeback in Week 7 when the Saints are taking on their biggest rival for the NFC title – the Tampa Bay Buccaneers.

Last season, the Bucs beat them in the Conference Final 30-20, but in the regular season, it was the Saints who got the win. And Onyemata was instrumental in that victory!

It was the only game in the 2020 season in which the Buccaneers failed to score a touchdown. The final score was 38-3 for the Saints, whose defense got three sacks on Tom Brady, as well as three interceptions. One of those interceptions was the work of David Onyemata.