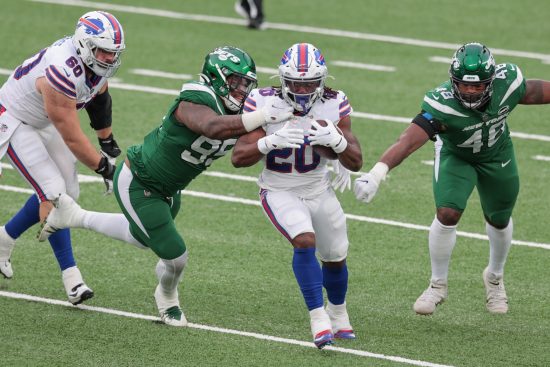 The New York Jets, continue their terrible campaign with a game against the Buffalo Bills, who experienced their first loss last weekend.

The Jets continue to experience losses, and it seems that they have a solid potential to end the season with all 16 defeats. We’re not kidding, that is really possible. On the other side, the Bills got one very hard slap in the face in Week 6, as Tennessee Titans blew away Josh Allen and the boys. After that one, Sean McDermott’s unit lost at home against the Kansas City Chiefs, showing many weak spots in their gameplan.

Where, When, and How to Watch New York Jets vs. Buffalo Bills

Are the Jets Tanking?

Some experts believe that the Jets might be tanking this year, and are after the No.1 draft choice. They already have a bag full of picks for the next draft, to be precise, five over the first three rounds.

That means that Sam Darnold’s time is up, because passing Trevor Lawrence while having a top pick would be insane. Yet, that is a distant future, and we want to get back to the present.

The Miami Dolphins’ defense shut out the Jets, with the team from Florida winning the match 24-0. Joe Flacco was 21-for-44 for just 186 yards and an interception, and their top rusher and receiver had combined for 108 yards. Pretty humiliating.

The Bills felt the taste of consecutive defeats after a long time, and they will now have to show what they are made of. We know that the Jets aren’t a team that might present some trouble, but Buffalo still needs to step up and quickly forget what happened.

Josh Allen had a terrible game against the Chiefs, throwing for just 112 yards, and experiencing many adversities throughout the entire match. After turning the ball twice against the Titans and having a subpar performance back then, Allen once again failed to deliver.

What was also a big problem for the Bills against the champions was the ground game where Zack Moss and Devin Singletary posted 42 yards combined. They need to find a way to improve this area; otherwise, relying upon Allen to both pass and run would be a disaster.

Jets and the Bills are together in the AFC East, and they play frequently. They already met this year, in Week 1, with the Bills winning 27-17, without too much trouble.

The spread on the Bills is -13, and even though you might think that it is too much, just think of it as a two-touchdowns difference. In the last five games, the Jets lost with a single-digit difference only once, and that was against the short-handed Broncos, at home, 37-28. Plus, Buffalo will probably be very motivated to redeem for the recent defeats. We’re thinking the Bills will blow out the Jets.