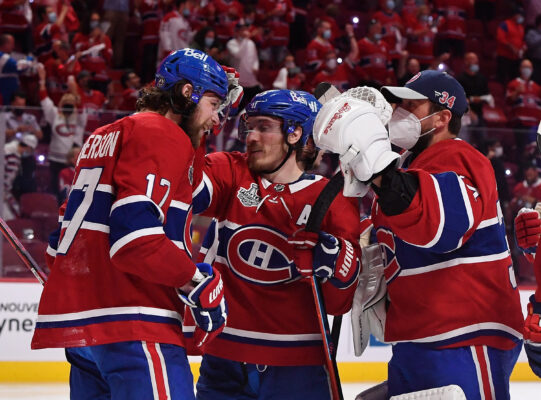 One thing that every ice hockey fan has understood throughout the season is that there is fight and determination in this Montreal Canadiens side. There was further evidence of that on Monday evening, as the Canadiens refused to give up their chances of winning the Stanley Cup this season by taking game four in the series against the Tampa Bay Lightning, which also ensured that there would be no sweep in the series this season.

The Habs would have certainly been forgiven for thinking that their chances of winning the Stanley Cup are over. However, there was no evidence of any sort of surrender on Monday evening, as they finally came alive in the series against the Lightning. The win means that the Lightning will now be forced to wait at least another couple of days to win their second straight Stanley Cup, despite many believing that victory on Monday was a full-gone conclusion.

It was a dramatic finish to the game, which left the Montreal crowd on the edge of their seats. However, after a missed shot by Cole Caufield, the puck was eventually put into the Lightning goal by John Anderson. The finish sent the home crowd into a frenzy, as they dared to believe that they were back in the Stanley Cup series, and the most unlikely of comebacks could be on the cards.

Fighting Spirit On Display By Habs

It may not turn out to be the pivotal moment in the series that the Canadiens fans would have been hoping for, as the Lightning could still claim the Stanley Cup on Wednesday. However, it would be hard to argue against the fact that the Canadiens deserved to win at least one game. It hasn’t been for the lack of trying throughout the series to this point, as they have peppered Andrei Vasilevskiy’s goal with shots in all three previous games so far.

Regardless, this was the night for Montreal to finally get their moment in the Stanley Cup finals that they have been craving for over 20 years. The Habs started the stronger of the two sides, and deservedly went into the lead in the opening frame. However, the Lightning struck back in the second. Both sides found the net in the third period, which forced the overtime period.

Anderson was in excellent form scoring twice on the night for Montreal, while Alexander Romanov also scored. Carey Price made 32 saves. Barclay Goodrow and Patrick Maroon scored the goals in defeat for the Lightning. Meanwhile, Vasilevskiy made 18 saves from the 21 shots that he faced.

One person that may be happier than most Lightning fans could be the Tampa mayor, who was hopeful of the franchise winning the Stanley Cup back in their home arena. She could now be granted that wish on Wednesday.

Can Montreal really come back to win the Stanley Cup?

Momentum is always huge in sports so it’s certainly possible, but Tampa Bay are still heavy, heavy favorites to win the next game and end it there.

The odds are clearly not in Montreal’s favor, and they show that even extending the series by another game or two is unlikely: