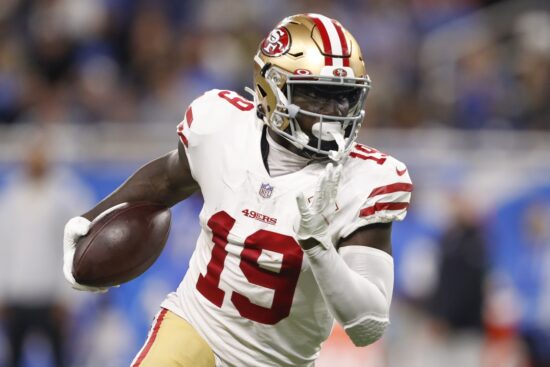 The 1-0 49ers travel across the country to the City of Brotherly Love to take on the 1-0 Eagles Sunday. The 49ers pulled out an eight-point victory, defeating the Detroit Lions, 41-33. The Eagles, on the other hand, blew out the Atlanta Falcons, 32-6. It’s going to be a hard-fought matchup for both teams, but should be nothing short of amazing, as ESPN has it currently sitting at 52.8% odds of the 49ers defeating the Eagles.

The 49ers Won Last Week, but It Wasn’t Convincing

Last week, the 49ers played the Lions, and the game should have been a blowout, which it was for most of the game. The 49ers couldn’t hold on for the full 60 minutes. If they want to prove that they are playoff condensers once again, they need to sharpen up on defense. The offense on the other hand was clicking on all cylinders. Led by their 29-year-old veteran, Jimmy Garoppolo, the 49ers put up 41 points last week.

Garoppolo completed 17 of 25 passes for 314 yards and 1 touchdown. Garoppolo had a long pass of 79 yards, to the speedster, Deebo Samuel. The 49ers rookie backup quarterback, Trey Lance, also completed one pass for five yards and a touchdown pass to Trent Sherfield. The 49ers’ offense also added two touchdowns on the ground by Elijah Mitchell and JaMycal Hasty.

Though the 49ers defense ended up giving up 338 passing yards and 116 rushing yards, they did end up scoring a touchdown, on an interception, by linebackers Dre Greenlaw. The linemen were also getting their job done for the most part, recording nine tackles for loss and recording three sacks, by Nick Bosa, Kentavius Street, and Dee Ford.

Not a Lot of Love in the City of Brotherly Love

The Philadelphia Eagles went into Atlanta last Sunday and absolutely took care of business. Jalen Hurts came out strong for the Eagles. Hurts completed 27 of 35 passes for 264 yards and three touchdowns. Not only did he not throw an interception, but he also added 62 rushing yards on seven attempts. Hurts was accountable for 326 of the Eagles’ 437 yards. Kenneth Gainwell also added a touchdown run, on 37 yards rushing.

Who Will Win Tonight’s NFL Game?

As difficult as it is for the team traveling across the country, I don’t think it’s going to be that difficult for the 49ers this week. I would look for a close game, with the 49ers coming out on top in a close game.