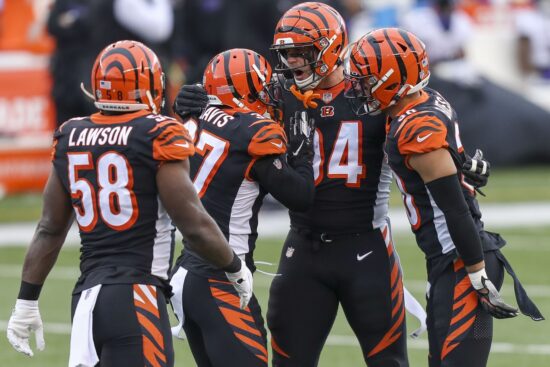 It’s been a great day for the fans of the Cincinnati Bengals, with two great news coming in. First, as reported by ESPN’s Adam Shafer last evening, the team has extended the contract of defensive end Sam Hubbard. According to the new deal, the 26-year-old will stay in Ohio for another four years, adding another $40m to his bank account.

Another great news for the Bengals is that their quarterback Joe Burrow is arriving in the training camp tomorrow. There were some concerns about the young QB’s fitness level, but the latest story is that Burrow has been taken off the PUP/NFI list some eight months after injuring his left knee.

Sam Hubbard Commits His Future to the Bengals

The team that’s been without a Playoff win since 1990 is planning to put an end to the disappointing run. However, they don’t want to rush anything; instead, the Bengals are thinking about the future.

One of the moves testifying of their intention to build a team that could go far in a few years’ time is the decision to extend the contract of one of their best defensemen, Sam Hubbard. As announced by the team this morning, the defensive end will remain a Bengal until (at least) 2025.

“Sam is about all of the things we want to be about, and it was a priority to get this deal done,”

Although the Bengals will have to splash out a lot of money, the deal is seen as one of the smartest moves made by the current management in recent times. The Cincinnati-native has been with the club since 2018 when the Bengals picked him in the third round of the draft.

He did well in his rookie season, taking his game to a whole new level in 2019. However, in the 2020 season, he got injured in Week 5, the result of which he had to miss out on action for an entire month.

Joe Burrow is Back!

The second-year QB is coming to the mandatory Bengals training camp injury-free. Burrow will take part in the workouts some eight months after suffering a torn ACL and MLS. The injury that also troubled Tom Brady in 2020, had put the young quarterback off the field for the final six games of his rookie season.

Without Burrow in the team, the Bengals lost four of the six games, finishing with a 4-11 record and failing to qualify for the postseason for the fifth time in a row.

Before suffering the season-ending injury, Burrow provided a decent input to the Bengals’ offense. The rookie QB had a 65.3% completion percentage, passing for 2,688 yards in 10 games. He made 13 touchdown passes that season, with five interceptions.

This season, the Bengals are putting their hopes in the young quarterback, expecting him to do even better. At some online sportsbooks, the margin for Burrow’s total passing yards in 2021 is set to 4,250.5. It’s not just because it’s his second year in the NFL, but also because this time, he’s going to have better support than in 2020 – Austin Reiter is reportedly set to join the Bengals.

Reiter is a former player of the Kansas City Chiefs, who started in their previous two seasons. The 6’3 305lb offensive center would provide fantastic support for the quarterback if he decided to sign a Bengals contract. If not, the Cincinnati franchise reportedly has a few other OC options on the table.