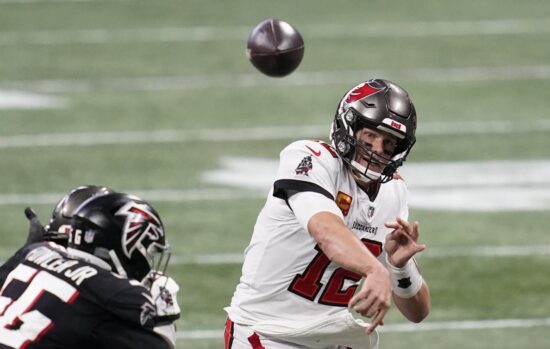 Third time is the charm. That is the favorite expression of all the Tampa Bay’s fans before the Buccaneers’ NFC Divisional Round clash with the New Orleans Saints in Louisiana.

These two NFC South rivals already faced twice, and on both occasions, Drew Brees was victorious against Tom Brady. But these are the playoffs now, and everything is much different. The pressure, the mindset, the circumstances… everything.

It’s why we can’t wait for this matchup to start.

Brown’s Chance for a Great Comeback

Antonio Brown was written off after his fiasco with the Patriots and the Raiders. But right out from nowhere, he got another chance, and arguably the best WR in the past 10 years used it in the best possible way. In order to reclaim his mega-star status and remind everyone of his terror days from Pittsburgh, he needs to step up against the Saints.

AB has five touchdowns in the previous five games, one of them against the Football Team in the Wild Card. Previously, he posted 11 catches against the Falcons at home, for 138 yards and two scores. All these numbers are suggesting that he’s on the rise.

One other guy woke up- Leonard Fournette. The former Jaguars’ RB racked up 93 rushing yards against Washington, scoring a decisive TD that held off the rival’s push. He, too, has been solid lately, scoring four touchdowns in as many games since late December.

In the last two matches, the Saints allowed just 16 points, seven against the Panthers and nine vs. Chicago in the Wild Card match. They were the reason for a victory over the Bears, not Drew Brees and his offense. NO’s defense forced the Bears to five three-and-outs last Sunday, two in the second half.

Though we need to say that the hosts had a lot of luck. During the first quarter, Javon Wims dropped what was supposed to be a certain TD catch, which significantly changed the course of the game.

The Saints’ defense began playing well in the late part of the third quarter and had one more blast midway through the last. When looking at their overall performance, it can’t be said that these guys did something remarkable.

Buccaneers vs Saints Head to Head

The opening game of the season saw the Saints beating Bucs, 34-23 in New Orleans. The second clash in Tampa Bay was a disaster for Brady and the bunch who lost 38-3.

Buccaneers vs Saints Pick and Prediction

Tampa is looking more confident than the Saints, but after two losses during the regular part of the season, it would be very risky to propose their win on Sunday’s clash. Instead, our focus will be on the total number of points, with the Over/Under limit set at 52. We expect to see a fewer number than proposed, mostly due to the Saints’ offensive struggles. Their defense is ok, but on the other side, Brees is way below the expected level.

Other NFL Divisional Round Games: