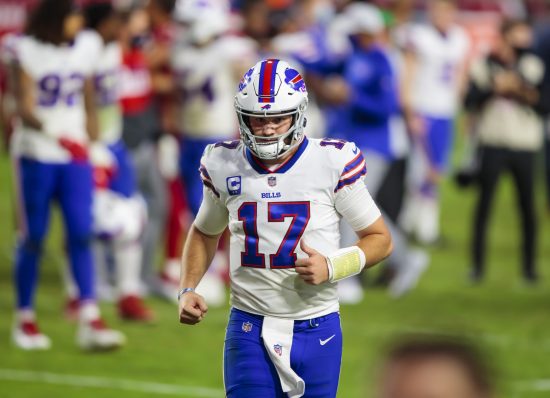 Lamar Jackson got his first playoff win, and not only that, he chased away all the ghosts from the past, defeating the Tennessee Titans on Sunday. The still-reigning MVP killed two birds with one stone, erasing the label of choking in clutch moments and avenging last year’s upset vs. Titans.

The same could be said for Josh Allen, who overcame the same adversity, redeeming for a terrible defeat against the Texans in the 2019 Wild Card round.

Time for Lamar to Be Great

If there is a situation in which Jackson needs to step up and show why many believe he is the face of the new NFL, and a game-changer, it is now. His Ravens are handicapped on several positions, especially in defense, and it is up to the 2019 MVP to cover up all that.

He was superb in Tennesse, rushing for 136 yards and a TD, and even though he didn’t have too much success with passing, Jackson’s impact on the game was immeasurable. Though, we need to mention Marquise Brown, who was moving the chains, often catching 109 yards on 7 receptions.

What to say about the defense? They held Derrick Henry to a miserable 40 yards on 18 carries. The guy who had 2,000+ rushing yards during the regular season was frozen like never before.

The Pressure is On… Allen

Allen and his teammates were experiencing a lot of pressure in the Wild Card against the Colts. But that won’t be anywhere near compared to what comes up next. Allen and Jackson are from the same draft, and it seems that the Bills’ QB was always appreciated less than LJ. Now, everyone expects him to step up and defeat the guy with whom he’s measured.

Stefon Diggs will have a major role in Allen’s performance. If the NFL’s No.1 WR plays at his usual level and has 100+ receiving yards with a TD or two, things will be easier for Bills.

The defensive unit will need to find a way to stop the guests from rushing. That is, to slow them down, as we all know that Ravens’ running game is the best in the league. Now, the Bills allowed 163 yards vs. Colts, which isn’t encouraging too much, and they can’t allow another such performance.

Ravens vs Bills Head to Head

Ravens vs Bills Pick and Prediction

We’ll see some heavy running here, especially from the Ravens, who are 200+ rushing yards in all the big games this year. Still, we need to express some doubts in their secondary.

John Harbaugh made a fantastic defense for Henry, but we don’t believe in the Ravens’ ability to cover Diggs, Beasley, and the rest of Allen’s receivers. Due to that, our choice here is the Bills’ triumph. And since the spread on the hosts is not too high, -2.5, Buffalo covering it should be just fine.