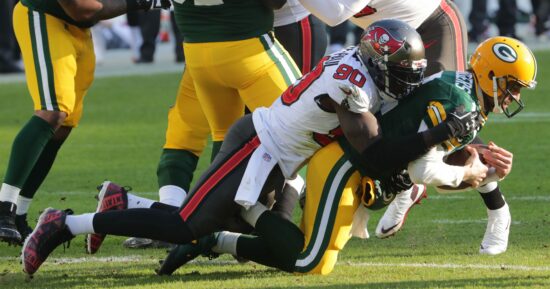 Of course it makes sense to have a plan for the future when one of your greatest players is edging closer towards the end of their career, but the Packers took a lot of stick for their decision to take Jordan Love last year.

Aaron Rodgers is 37 years old so he may only have a few years left playing at his highest level, but the roster wasn’t a complete one last season and he needed some help.

The 1st round pick actually went on taking Jordan Love who is presumed to be the long-term successor to Rodgers, but you have to wonder what could’ve been if they took someone who could contribute straight away with that pick.

They just came up short against Tampa Bay in the playoffs as a lack of protection and weapons hurt the offense, so it’s easy to speculate and say the result would’ve gone the other way if Rodgers had someone else to help him.

It’s expected that Green Bay will use their draft this year to get him some help, but it’s not completely clear if he’ll be around to benefit from that as talk of his discontent and a possible trade have gathered pace today:

It would obviously be a monumental shock if he was traded and it could shake up the entire draft, but it has to be considered as a possibility after this and you can be sure that phone calls will be made to sound out this situation.