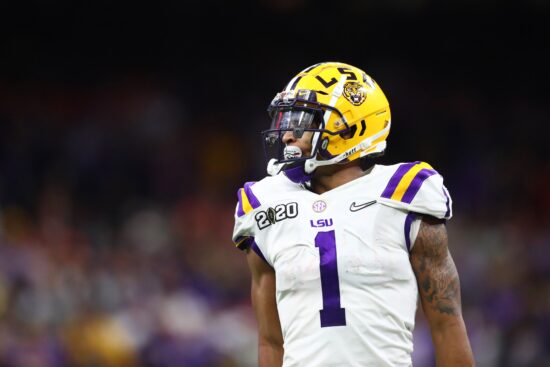 While we saw a couple of trades in the first round, it was the second round where things sparked into life as teams looked to move up and find themselves some first round value.

The expected run on offensive line talent and defensive backs resulted in a few interesting moves, so here’s a look at some of the biggest talking points from the first two rounds.

It wouldn’t have been a total shock if either Ryan Pace or Matt Nagy were moved on by Chicago in the off-season.

They do have a great defense which could even be Championship calibre, but they’ve also felt the effects of the Mitch Trubisky bust for a few years.

Andy Dalton was never going to be the man to spark the offense into life, so it’s interesting to see that they were the biggest movers in the first two rounds.

They went up on opening night to snag Justin Fields as their new QB, while they did something similar in round two to take some help at tackle with Teven Jenkins, so at least they do know that the offense needs some help.

The move to get Fields saw them give up a 1st next year so it does look like Nagy and Pace are throwing everything at being a success this year, and they may have to move on if this final gamble doesn’t pay off.

Loading up on talent from the same schools and familiar connections

Logic dictates that you take the best player available, but the draft is all about building the best roster that you can and it makes a ton of sense to take players who already have a connection.

Jacksonville loaded up on Clemson talent as they added Travis Etienne to the pick of Trevor Lawrence, while the Patriots doubled down on Alabama talent with Mac Jones and Christian Barmore heading to Foxboro.

We also saw some familiar connections being reignited as Joe Burrow will find himself throwing to Ja’Marr Chase again, while Tua Tagovailoa will link up with Jaylen Waddle again in Miami.

Time will tell if those connections will translate into the NFL level, but it surely gives them a head start going into next year.

READ MORE: Every pick from Round One of the NFL Draft

1st round receiver and 2nd round tackle?

It’s pretty difficult to get fired up over your team taking an offensive tackle, but in many ways everything else in your offense doesn’t matter unless the QB has time to actually get his throws away.

There were a few teams who needed to make an addition at WR and at tackle, but who addressed it in the correct order?

The Bengals are the ultimate example as they desperately needed someone to protect Joe Burrow, so they were faced with the choice of taking Penei Sewell or Ja’Marr Chase in the first round.

They decided to go with Chase and then added the protection in the 2nd with Jackson Carman, while The Eagles took a similar route as they went with DeVonta Smith in the 1st before adding Landon Dickerson with their 37th pick.

The Jets decided to go with the alternate option of trading up for Elijah Vera-Tucker in the opening round and then adding a WR with Elijah Moore in the 2nd, so it will be interesting to see who took the right option.

READ MORE: Every pick from Round 2 of the NFL Draft

Speaking of the Jets…

Robert Saleh has a serious job on his hands trying to overhaul this roster, but you have to think that Zach Wilson will be very pleased with what he’s seen so far.

The Jets wasted little time in trying to help him as they went with a guard and then a WR with their next two picks, so it really does look like lessons have been learned from the past.

It’s very possible that Sam Darnold just wasn’t good enough all along, but he was given little to no help by the Jets in his formative years and it all culminated in the infamous “I’m seeing ghosts” game.

Wilson looks like he’s going to get every chance to fulfil his potential in New York, and it might almost be time for the fans to feel a little bit optimistic about the future.

Loading up the cannon for one final run with Big Ben

There’s every reason to think that this will be Ben Roethlisberger’s final season in the league, so there may have been some temptation to trade up and find his long term successor.

The offense completely died down the stretch last year and it needed to be addressed, so Big Ben should be delighted that he was given help with the first two picks.

RB Najee Harris should help solve their one dimensional attack by providing some spark in the running game, while they also went for some help at TE by taking Pat Freiermuth in the 2nd.

Cleveland, Baltimore and Cincinnati all look set to be strong next year on offense so they’ll need to move the ball and keep up in the division with some high scoring games, and at least this gives them a solid chance of doing that.

This might be one of the bigger shocks of the night, as the reaction to recent Raiders picks in the first few rounds has often been met by a bemused panel of experts on the TV broadcast.

That was certainly the case last night as the pick of Alex Leatherwood wasn’t endorsed by Daniel Jeremiah and co, but the pick of safety Trevon Moehrig was met with approval and even some excitement in the studio.

It’s unlikely that Gruden and Mayock will care at all, but it was noticeable all the same.

Green Bay finally make a move to boost their offense

It’s really not clear how bad the rift between Green Bay and Aaron Rodgers really is, but the decision to take a CB in round 1 won’t have helped.

Rodgers needs some help on offense and Green Bay don’t tend to go big in free agency, so the draft is where those additions are usually made.

They started to address that in round 2 with the selection of Josh Myers, although again you can argue that he’s simply a replacement at centre for Corey Linsley and it’s unlikely the rookie will be at that level straight away so is that really going to appease number 12?

The answer to that is probably no, but at least it’s a start.

Tampa begin to plan for life after Tom Brady

We do have to work on the assumption that Tom Brady will eventually stop playing football, although he’s been seeing off drafted QBs for years as he just refuses to stop.

He might still have a couple of years left in him yet, but Tampa did move tonight to draft his eventual successor in Kyle Trask.

Trask was rated as one of the best prospects outside the top 5 QBS so he’s an interesting prospect, and there were some promising signs in the description of him after the pick.

He was described as a player who is accurate and who makes good decisions so that side of his game will surely benefit as he learns from the GOAT, while he’ll also have some time to develop and possibly step in to replace him in a couple of years.