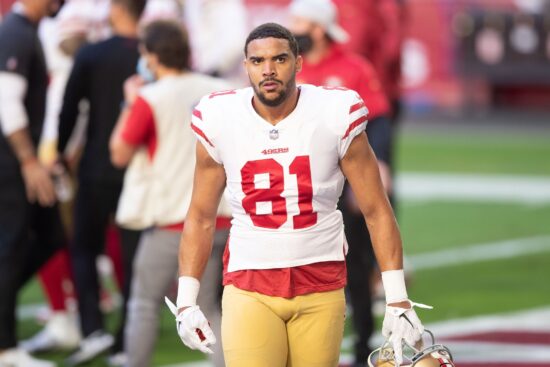 One of the downsides of the NFL is seeing great players cut down in their prime due to injuries, so there will always be some wonder over how good Jordan Reed could’ve been if he stayed healthy.

He’s been named to the Pro-Bowl, he was regularly ranked in the top 100 players of the league and his numbers were strong despite missing numerous games, but concussions took their toll and he was forced to formally retire.

As a player who’s struggled with injuries it’s understandable that helping some of the current stars would appeal to him, and there is intrigue around cannabis treatments after the NFL relaxed their policy on the drug.

Reed spoke to Vegas Odds about a number of matters, but it’s clear that he feels his new venture into the cannabis market could be used to help current NFL players manage their pain and to avoid common issues with opioids:

I think cannabis is the safest alternative, very effective. Right now, the cannabis market is mainly taken up by people who want to use it for pain management.

Obviously, people are seeing the benefits of cannabis for pain. There’s definitely an opioid crisis in America. 900 people a week die from opioid use. There haven’t been any cannabis-related overdoses, whereas for example, in 2016, there were 20,000 prescription opioid-related deaths

There are suggestions that Rob Gronkowski was able to return to playing as a result of using it as part of his treatment after his supposed retirement from playing, while the relaxation of the NFL rules should also mean that players and their coaches will be more open to seeing it as a viable treatment.

It’s a treatment that could be especially useful to players who play in the tight-end position, particularly when you see how banged-up they get in the season, so there will often be a variety of issues that they’re dealing with on a day-to-day basis.

One of the advantages of the positions is the mismatches that can be created, but it also means opposing players will go for the knees to cut them down and finding a way to manage that pain will be very useful.

Reed also gave us some views on the upcoming NFL draft and the TE class of 2021, while there’s one name in particular that everyone is looking at.

The scarcity of quality in the QB position means that they’ll always get taken first, but there are many who think that Kyle Pitts is the best player in the whole draft class.

Pitts has all the skills of a wide receiver, but he also has the frame to cause chaos from the position, and it was the Falcons who Reed suggested as the perfect landing spot:

The Atlanta Falcons would be ideal for Kyle Pitts, teaming up with all-pro QB Matt Ryan, all-pro receivers like Julio Jones, and it’s clear that the Teams before him will be looking for QBs. Kyle will be able to have ideal matchups, due to the sheer number of weapons on offense.

This is a huge draft for Atlanta because they pick at number 4 overall, so they have a major decision to make when it comes to loading up on weapons for one final run with Matt Ryan or they may decide to look for their future QB instead.

If they do take Pitts then it’s an instant issue for opposing defences as they’ll need to find a way to cover Pitts and Julio Jones, while Calvin Ridley could feast if he’s given 1 on 1 matchups against lesser corners.

If Atlanta do decide to go down the QB route then there’s also the chance that he falls to Miami at number 6, so he could also still stay in Florida after his outstanding college career with the Gators.

Obviously there are other TE’s in the draft although they may be getting less attention, so we also asked Reed who else he liked from the upcoming class:

I like TE Kyle Pitts being that I’m also from Florida, a once-in-a-generation type player. I also like Brevin Jordan from Miami. He reminds me of myself in how he runs routes and his athleticism after the catch.

Jordan is an interesting prospect as there are some serious signs of promise in his play, but he’s also raw in other elements so he may be seen as more of a project.

The NFL website has him down as a solid pass catcher who will force the defense into making some adjustments due to his ability, but there are worries about his ability to block so he’s seen as more of a mid-round option at this point.

That’s not always a bad thing as Reed himself was taken in the 3rd round so there is always quality that can be found later on in the draft, while George Kittle went as late as the 5th round so it does demonstrate that it’s not always about the first-round picks.

It’s expected that Pitts will go on to be a generational talent and it will be fascinating to see how high he’s actually taken, but that number 4 pick with the Falcons looks like a pretty good idea.