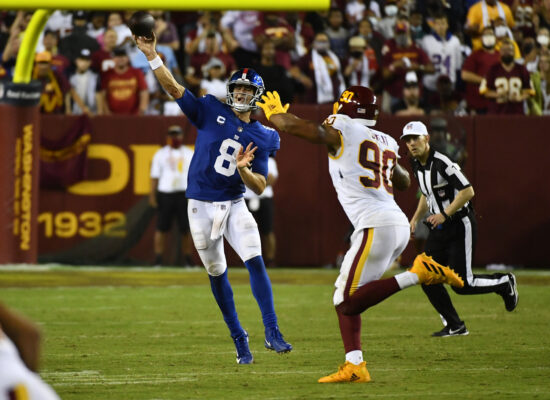 The Giants come into this battle of defeated teams, as a three-point favorite, with 63.4% of experts predicting them to come out victorious. If Matt Ryan and the Falcons have any say, that won’t be the case. The Giants defense is allowing a lot of yards through the air, while the Falcons defense has a hard time keeping their opponents out of the end zone.

Can Matt Ryan Return to His Previous Glory?

Matt Ryan, the usually consistent piece of the Falcons offense is off to a rough start. In his first two starts of the 2021 campaign, Ryan has completed 56 of 81 pass attempts for 464 yards, while only throwing two touchdown passes. On the negative side of his game, Ryan has been intercepted three times and sacked four times already. Ryan’s two touchdown passes have been thrown to Calvin Ridley and Cordarrelle Patterson. Patterson has also added one rushing touchdown to his receiving touchdown, making him easily the most productive offensive player on the Falcons offense through the first two weeks.

The Falcons defense, on the other hand, hasn’t been great. They’ve been giving up, on average 270 yards in the air and 127.5 yards on the ground. After looking at these totals, you quickly realize why, on average, the Falcons are giving up 40 points per game. The Falcons haven’t put a lot of pressure on opposing quarterbacks, only getting to the opposition for a total of four sacks so far this season. The sacks are recorded by linebackers, Deion Jones, Jacob Tuioti-Mariner, and Dante Fowler Jr., and by a defensive tackle, Marlon Davidson.

Can The Giants Secure A Victory On Eli Manning Jersey Retirement Day?

Daniel Jones and the Giants have been averaging 369.5 yards per game. Of those 369.5, 258 yards are coming in the air, and 111.5 of those yards are coming on the ground. Jones has completed 44 of 69 pass attempts for 516 yards and two touchdowns. Unlike Ryan, Jones has not thrown an interception yet this season nor has he been sacked. Not only is Jones throwing touchdown passes, but he also has the only two rushing touchdowns for the Giants and is their leading rusher, with more than 40 total yards on the ground. When he’s throwing the ball, Sterling Shepard and Darius Slayton are the only two who have caught touchdown passes for the Giants this season.

The defense, just like the Falcons, is horrendous for the Giants. They might only be giving up 28.5 points per game, but they are giving up, on average 426 yards per game. Of those 426 yards per game, 300 of them are coming in the air, and 126 are coming on the ground. The Giants, in order to be successful on Sunday, truly need to keep Ryan and Patterson quiet. The Giants defense has gotten to the opposing quarterback three times this season, a defensive tackle Austin Johnson has recorded one sack, while a linebacker, Azeez Ojulari has recorded two sacks so far this season. James Bradberry, a cornerback from Samford has the only Giants interception this season as well.