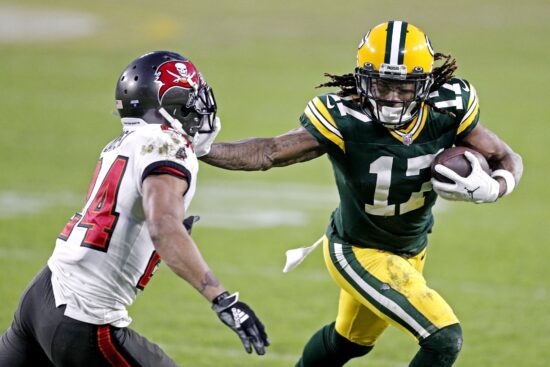 It’s common knowledge that the Green Bay Packers are in trouble. But, it’s not just about Aaron Rodgers. New problems arrived yesterday when the four-time Pro Bowler Davante Adams broke off negotiations for a new contract.

The Packers and Adams have been in talks for months, trying to find an agreement over a long-term extension of his contract that’s supposed to end in 2022. Reportedly, the 28-year-old was the one to exit the talks, the reason being that the Packers were unwilling to meet his salary demands. As per his current deal, Adams will get $12.25 million in 2021, but he wants more!

Not being able to broker a deal with Adams could mean big problems for the Packers, who are already over their heads with trying to figure out how to keep the core of their team together.

Adams Wants to be the Highest-Paid Receiver in the League

Adams’s representatives reportedly demand the Packers to make him the highest-paid receiver in the league. Sound a demand isn’t unfounded, considering that Adams was the league leader in touchdown receptions last season. He was also the #5 in the list of players with the most receiving yards in 2020.

Another reason why Adams has the right to demand a higher salary is that he’s currently in his prime. At the age of 28, the receiver certainly has plenty of more seasons in his legs.

Still, the main reason why the Packers will probably have to do a rain check on their proposal is that losing Adams could mean a disaster. However, as hinted by the receiver, such a scenario is very plausible.

The man who got to the first-team All-Pro in 2020 recently shared a post on Instagram, alluding to The Last Dance, a documentary about the trophy-winning seasons of the Chicago Bulls. The post might seem innocent at first, but many understood it as Adams’ announcement that the glory days at Lambeau Field are over.

Aaron Rodgers added fuel to the fire by posting the exact same photo on Instagram raising the question of whether the Packers are going to be without their two best offensive players in the upcoming season.

No Rodgers, No Adams, No Playoffs?

Betting odds suggest that both players are likely to stay in the team in 2021. However, even if they don’t move elsewhere, it’s clear that neither Rodgers nor Adams are going to feel very happy. Whether their dissatisfaction is going to affect their performances on the pitch remains a question.

The talk about the two disgruntled stars has made odds shift against the Packers. The team that finished at the top of the NFC table in the regular season is now the #4 favorite to repeat that feat at +800. The odds on the Packers winning the conference are even worse. Oddsmakers are currently giving +1000 on such a scenario playing out.

When it comes to their chances of winning the Super Bowl LVI, the Green Bay Packers’ odds are currently +2000.