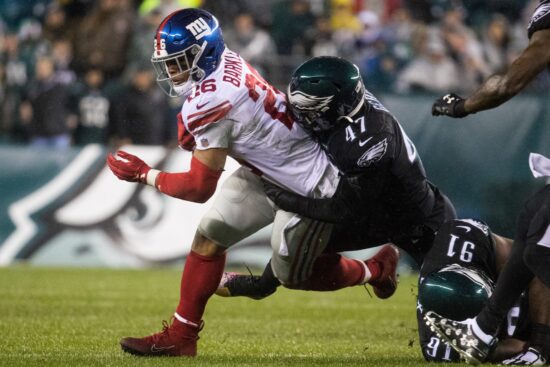 New York Giants running back Saquon Barkley hasn’t been a common feature in the headlines lately. With an ACL injury ending his 2020 season in Week 2, the RB has been flying under the radar of football fans.

His name, however, popped up in the news yesterday, although not for footballing reasons. The story goes that the RB has decided to get involved in the Bitcoin game.

While appearing on The Best Business Show with Anthony Pompliano, the 24-year-old said he’s planning to have all of his endorsements paid in Bitcoin.

Even though he hasn’t played a single NFL game since September 20, 2020, Barkley remains one of the richest running backs in the league. It’s not just because of the hefty salary he’s getting from the Giants, but also for the numerous endorsement deals he’s inked.

Salary in Dollars, Endorsements in Bitcoin

Barkley was selected by the New York Giants as the second overall pick in the 2018 NFL Draft. His rookie deal was for $31.1 million across four years. At the time, it seemed like a hefty payout, but Barkley quickly proved that the Giants had made the right decision.

In his first season, Barkley started all 16 regular-season games, rushing for 1,307 and scoring a total of 15 touchdowns (11 rushing TDs and 4 receiving TDs). His performances in the rookie season earned him Pro Bowl honors, not to mention that he was voted the Offensive Rookie of the Year.

It’s needless to say that all of that got him on the radar of major companies. Nike, Toyota, Pepsi, and a few others made Barkley their brand ambassador in 2019. A year later, he signed an endorsement deal with Hulu, appearing in one of their adverts together with Cleveland Browns QB Baker Mayfield.

That’s plenty of endorsement money for Barkley to get into the investing game, which is exactly what he’s planning to do. However, rather than investing in businesses or real estate, the RB is planning to go with Bitcoin. His plan is to have his Giants’ salary paid in dollars, while his endorsement money is meant to be converted to the world’s most popular cryptocurrency straight away.

It may seem surprising that a professional athlete has decided to dabble into the cryptocurrency universe. However, Barkley isn’t the only one. In fact, he’s just one in a long list of NFL players who either have some crypto assets or plan to get them.

One of the first NFL players to get on the cryptocurrency bandwagon was Sean Culkin. The former tight end for the Kansas City Chiefs wanted his salary to be paid fully in cryptocurrency. Unfortunately, his idea never came to fruition as the Chiefs ended up releasing him on free agency in May.

There is one player, however, who actually did what Culkin wanted to do for himself. The man in question is the #1 overall pick of the 2020 Draft, Trevor Lawrence. After signing a rookie deal with the Jacksonville Jaguars, the young QB exchanged his $24.1 million signing bonus to cryptocurrency.