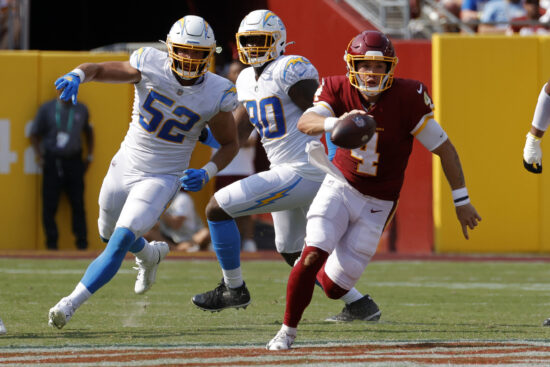 It could be said that the Washington Football Team suffered a double loss last week, falling 20-16 to the Chargers but also having QB Ryan Fitzpatrick head to the injured reserve with a hip injury. That means the keys to the offense get turned over to Taylor Heinicke when the New York Giants come to town on Thursday night. New York is also 0-1, starting 2021 with a 27-13 home loss to the Broncos.

The Giants managed just 13 points in week one against a very good Broncos defense, but things don’t get any easier having to travel to face Washington on Thursday night. It’s generally accepted that WFT has one of the best defenses in the NFL, although they did look susceptible through the air with LAC’s Justin Herbert throwing for 337 yards in week one.

That does give hope for Daniel Jones heading into the TNF matchup, even though the Giants QB was just 22/37 vs. the Broncos. Ideally, New York will get more from the running game, as they eased Saquon Barkley back from a knee injury with just ten carries for 26 yards. WFT was 14th defensively vs. the run last year but were 2nd best against the pass.

New York was picked apart by Denver’s Teddy Bridgewater in week one (28/36 with 2 TDs, but Heinicke is far less experienced. The Giants also gave up a 70-yard TD run to Melvin Gordon III, so they have some issues to address against the run as well.

Washington lost Fitzpatrick after throwing just six passes in the season opener, but there are some WFT fans who feel the team is in better hands with Taylor Heinicke, who was 11 for 15 with a TD off the bench last week. Heinicke started Washington’s playoff game last season, throwing for 306 yards against eventual champs Tampa Bay.

WFT had their chances against the Chargers in week 1, holding a 16-13 lead into the 4th quarter. Washington couldn’t sustain drives, though, losing the time of possession battle 36 minutes to 24, and eventually, that great WFT defense ran out of gas.

The good news is that Washington gets a much easier task against the Giants offense on Thursday compared to Herbert and the Chargers. New York is easing Saquon Barkley back, which won’t be easy to do against a WFT team that held LAC to 90 yards on the ground on 29 carries. Washington is 28th defensively vs. the pass after one week, but that’s putting a lot of trust in Daniel Jones.

The offense could be at a premium in this one, with Washington’s defense ready to dial it up against Jones but WFT also playing conservative with their backup QB under center. The total is down to 40.5, and even that still seems high. It looks like the first one to 20 wins this game.