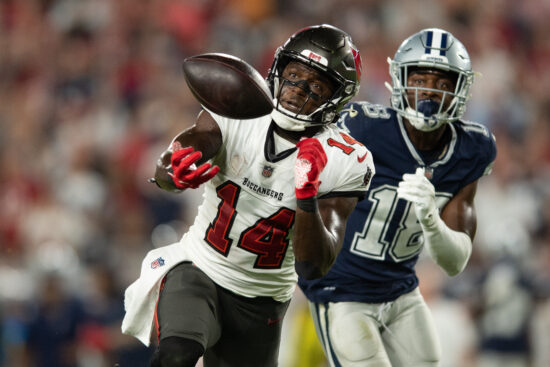 If you’re looking for the best NFL Las Vegas picks for the Cowboys vs Buccaneers – look no further!

After winning the NFC East division last season, Dallas will be looking for their first back-to-back division title since 1995-1996.

After changing his mind about retirement, 45-year-old Tom Brady and the Buccaneers will try for another deep postseason run.

The Cowboys had a very strong regular season last year, finishing 12-5. Although a 6-0 record against the weak NFC East division may have skewed that mark a bit, the Cowboys are still a dangerous team. An offense that has been very consistent while led by a healthy Dak Prescott is now supported by a defense with playmakers such as LB Micah Parsons and CB Trevon Diggs. Dallas may have gotten upset in the Wild Card round last season, but they’re expected to once again be contenders this year. The question will be if they can lock down their first back-to-back division title in over 25 years.

The Cowboys opted for offensive line support with their first pick in the 2022 NFL Draft. They selected offensive tackle Tyler Smith from Tulsa. After losing star left tackle Tyron Smith to a hamstring injury that’s expected to sideline him for months, Dallas may be forced to thrust rookie Tyler Smith into a big role in Week 1. Their offensive line will be the determining factor in their success this season.

The Cowboys get a real test to start out the season. After hosting the dangerous Buccaneers led by Tom Brady in Week 1, they’ll host the defending AFC champion Bengals in Week 2. A road matchup against the Super Bowl champion Rams looms in Week 5.

After winning Super Bowl LV in 2020 by a huge margin, the Buccaneers were looking for similar success last season. Unfortunately, they came up 3 points short against the soon-to-be Super Bowl LVI champion Los Angeles Rams. After originally planning to retire, quarterback Tom Brady decided to return for one more season. The Buccaneers responded by further solidifying their roster. After extending running back Leonard Fournette among other key players, the Bucs added former Falcons wide receivers Russell Gage and Julio Jones to further support Brady in the passing game.

Tampa Bay’s defense is also expected to be among the league’s best once again this season. They started the offseason by exercising the 5th-year option on star linebacker Devin White’s contract. With their first pick in the draft, they selected defensive end, Logan Hall, at #33 overall. Hall will gain useful experience learning behind pro-bowl linebackers Shaq Barrett and Lavonte David. The Buccaneers’ defense features a number of top-tier talent, including DT Vita Vea and CB Antoine Winfield Jr. The combination of this defense with Tom Brady and his offensive weapons will once again be tough to beat.

This is another premiere matchup between two teams that were really good last season. Despite the Cowboys having the benefit of home-field advantage, I’m more confident in the Buccaneers winning this game. Tom Brady is 17-3 in season openers in his career. He got his 17th season-opening win last year against the Cowboys. I see déjà vu in Dallas this year, with another Bucs win.

Fantasy Football Freebie: Top Buccaneers wide receiver Chris Godwin is expected to miss at least a portion of the season as he continues to recover from last year’s ACL injury. Tampa Bay may have a crowded wide receiver room, but there’s a clear #1 option with Godwin gone. Look for Mike Evans to get targeted often on Sunday Night Football.