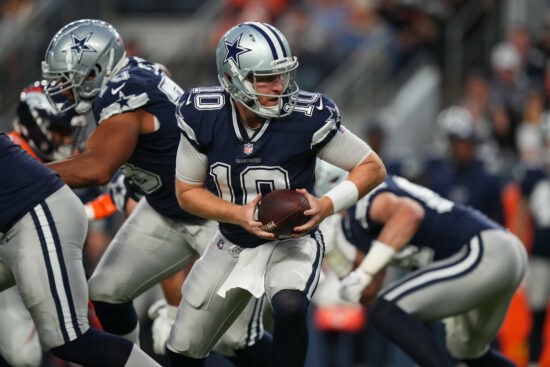 If you’re in search of some NFL Las Vegas picks, look no further. You’re in the right place!

The NFL preseason didn’t start well for the Cowboys and the Chargers, who lost their respective games last weekend. The Cowboys were defeated on the road in Denver to the Broncos, while the Chargers couldn’t beat the LA Rams. These two teams played an amusing football last year, and we just might see more of that on Saturday night.

Mike McCarthy’s crew committed 17 penalties in Denver last weekend for 129 yards. We aren’t sure whether it was because of the altitude or something else, but it really hurt the Cowboys’ projects of winning that event.

All 17 points they allowed took place in the second quarter, and that was pretty much the moment when everything was solved. Cooper Rush had 84 passing yards for one pick, and Ben DiNucci 112 for one TD score and without fumbles.

If it weren’t for all those penalties that constantly cut their rhythm and boosted the hosts’ morale, the result could have been much better for the Cowboys. We need to add that their defensive line did one hell of a job, limiting the Broncos to only 39 rushing yards on 22 snaps.

Is it Time to See Herbert?

The hype in LA surrounding the Chargers is massive. We haven’t seen this much attention surrounding one LA team in a while, and the only reason for that is Justin Herbert, who became a superstar the moment he took the field in that LAC jersey.

The Rams won in the local matchup last weekend, 29-22, but the Chargers’ backups held well until the final sequence once their counterparts made a difference and got away with a win.

Chase Daniel was superb, throwing for 117 yards, and two TDs, completing 11 of his 17 passing attempts. Easton Stick had two more passing yards, 16-for-23, but without a pass for a score, being picked once. Michael Bandy with 73 and Joe Reed with 61 receiving yards and a TD each were the top receiving threats in this event.

We could see Prescott and Herbert on the field on Saturday night. And even if they don’t appear, both units have solid receiving targets and like to play high-scoring affairs. Their backup QBs are relatively stable, so picking over 38.5 points is tempting. The conditions for playing are going to be much better than in Denver, which should suit better to the Cowboys. On the other end, the Chargers are always aggressive and offensive-minded, so we have to take this pick.