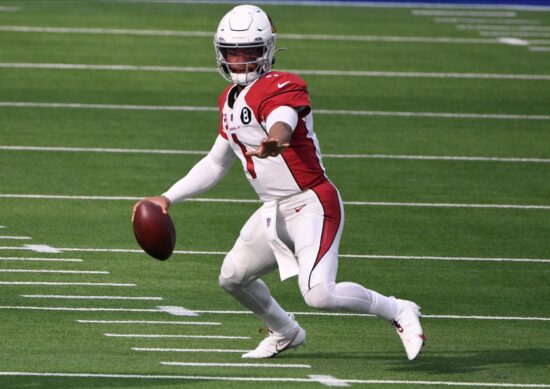 Kyler Murray leveled with Patrick Mahomes atop the list of the NFL MVP favorites. While Mahomes had a very bad game against the Chargers, Murray was shining in Jacksonville.

Aaron Rodgers showed some of his magic last night against the San Francisco 49ers when he set up a field goal position for his kicker in only 37 seconds.

We haven’t seen one Cards’ QB being in the MVP race for a long time, but the way Kyler Murray plays, that is about to change. The youngster is now +700 to win the award, the same as Patrick Mahomes.

Murray and the Cards started the season with 3-0, unlike the Chiefs, who are 2-1. He wouldn’t throw for a TD on Sunday, but had 316 yards and one rushing score, once again perfectly orchestrating the Cardinals’ attack.

Meanwhile, the Chiefs and Mahomes lost 30-24 against the Chargers in LA, and the former MVP had 260 yards with three TDs and two picks. Overall, he wasn’t very good in this match, and some of his mistakes have helped the hosts earn a victory.

A few days ago, the three-time NFL MVP and last year’s best player in the league was +1300 to win the award again. After this Sunday night, those odds are shorter, +1000.

The 49ers took the lead with 37 seconds to go, and the Packs were on the verge of another defeat at Levi’s stadium. Still, that is when Rodgers stepped on the scene and shocked the fans in San Francisco.

He moved the ball 42 yards down the field, setting up a perfect position for Mason Crosby to deliver a 51-yard field goal and secure the Packs their second win of the season. And may we say a very important one, because the 49ers are one of the playoff rivals from the NFC.

This immediately pushed AR on the MVP list, and if he continues to play like this, there is no doubt that the odds on the veteran are going to shrink even more.

Matt Stafford is one of the few guys who might be the dark horses for winning the NFL MVP award. After his trade this summer, the LA Rams immediately became one of the biggest Super Bowl contenders because of his aggressive and flamboyant style of play.

This weekend, the Rams were better than the champions, Tampa Bay Buccaneers, 34-24, which undoubtedly boosted their morale before the remaining part of the season.

Not only that, but Stafford’s odds improved, and he is now +750 to win the MVP title, the same as Bills’ Josh Allen, and slightly behind Tom Brady, +725.

As you can see, the race for this award will be very interesting.