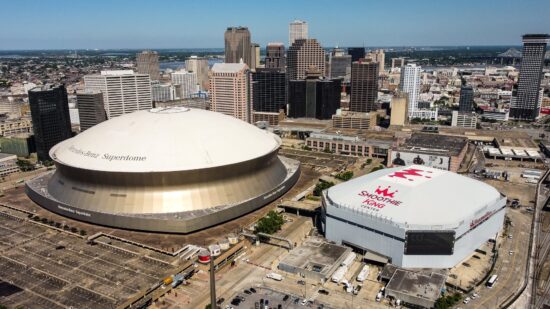 Say goodbye to Mercedes-Benz Superdome! No, New Orleans’ downtown stadium isn’t going anywhere; it’s just getting a new name! From now on, the name of the Saints’ home is Caesars Superdome.

The rebranding comes after the NFL franchise clinched a sponsorship deal with Caesars Entertainment. The Nevada-based casino company will have to pay $138 million for its name to stay at the Saints stadium for the next two decades.

“All of us at Caesars are proud to be part of New Orleans’ vibrant culture. We understand that the Caesars Superdome is more than an iconic venue, it’s the symbol of a resilient and innovative community,”

Dawn of a New Era for New Orleans

With only two years’ break, the Superdome has been the home to the New Orleans Saints since 1975. Back then, it was known as Louisiana Superdome. Some 36 years later, Mercedes-Benz got ahold of the exclusive naming rights. Then, in 2021, the deal with the car manufacturer expired, and the stadium got a new sponsor.

Apart from changing its name, the venue will change its looks as well. According to the deal between the Saints and the State Government, the facility will undergo a $450 million renovation over the next couple of years. The decision to revamp the Superdome came after the venue was selected to host several big sporting events, including Super Bowl.

If everything goes according to plan, Caesars Superdome will host the Super Bowl LIX in February 2025. Before that, the venue will host several annual events such as the Sugar Bowl, the New Orleans Bowl, the Bayou Classic, and so on.

On top of that, the Superdome will continue to serve as the home stadium for the New Orleans Saints, where the Black and Gold will play eight games in the 2021 regular season.

The last game of the New Orleans Saints at the Mercedes-Benz Superdome was the NFC Divisional Playoff game against the Tampa Bay Buccaneers. The game was played on January 17, when Tom Brady’s magic led the Bucs to a 30-20 win.

Fast-forward six months and the words “Mercedes-Benz” are no longer there. Taking down the sign that had been there for the past 10 years marks the end of a beautiful era, which saw the Saints qualify for the playoffs six times.

The name of the new sponsor will be installed over the next couple of days, just in time for the Saints’ pre-season games.

The Saints will play two pre-season games at the Superdome, while their first home game of the NFL season is the one against the Packers in Week 1.

Online sportsbooks doubt the Caesars Superdome NFL premiere is going to be a successful one for the hosts. With the news about Aaron Rodgers reconciling with the Packers, the odds have moved in favor of the visiting team.

In their first NFL game without Drew Brees as their QB after 16+ years, the Saints are two-point underdogs.