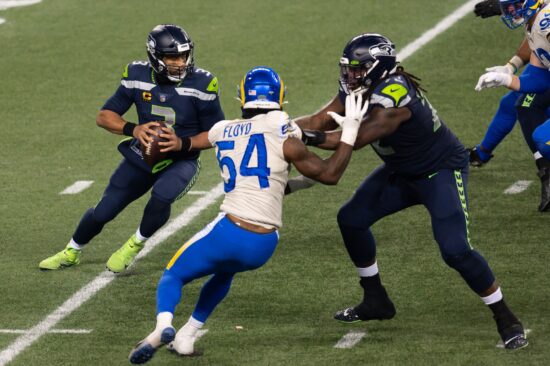 Russell Wilson’s future in Seattle is not certain anymore as the former MVP declared his intention to stay but also mentioned a few preferable destinations in case he gets traded.

His agent Mark Rodgers stated that his client hasn’t asked for a trade, but after all the things that happened recently, it is obvious that the atmosphere in Seattle is not pleasant at all.

Wilson didn’t hide the frustration over the past few months, saying that he wants to have a bigger impact on the team’s future.

According to the latest info and the sources from inside the franchise, he already revealed which teams would be a good fit for his trade – Dallas Cowboys, Chicago Bears, New Orleans Saints, and the Las Vegas Raiders. As said, this wasn’t anywhere near a trade request, but Wilson’s actions caused a massive reaction in the NFL community.

Him suffering 47 sacks in the 2020 year are the biggest reason for such behavior, with the prolific quarterback being unhappy for quite some time when it comes to his protection on the field. That is why he wanted to have a bigger role in the team’s moves on the market.

After just one year in Colorado and three games played, the five-time Pro Bowl DT was released this Thursday. It appears that the Broncos wanted to move in a different direction which is why they decided the get rid of his $12 million contracts. The franchise from Mile High will now have $43 million in cap space, among the most in the league.

Casey suffered a season-ending injury in Week 3, which was a major blow for the Broncos, who had ambitions to attack the playoffs. He landed in Denver during the previous offseason, with the franchise from Colorado sending a seventh-round pick to Baltimore in exchange.

The 31-year old will now be a free agent. His CV is impressive, but the latest injury is something that could definitely affect his value.

The news broke out in Houston that the new head coach David Culley and the star QB, Deshaun Watson, met recently. Texans’ leader on the field was firm in his intention to leave the team, and he explained that to the newly appointed Culley. On the other side, the franchise executives once again ruled out the possibility of his departure from the NRG Stadium.

Watson decided to demand a trade request because of several reasons, the most important being Nick Caserio’s appointment at the general manager position.

Texans recently lost their franchise icon, DE JJ Watt, and they aren’t keen on dropping another superstar who should be the team’s cornerstone over the next decade.