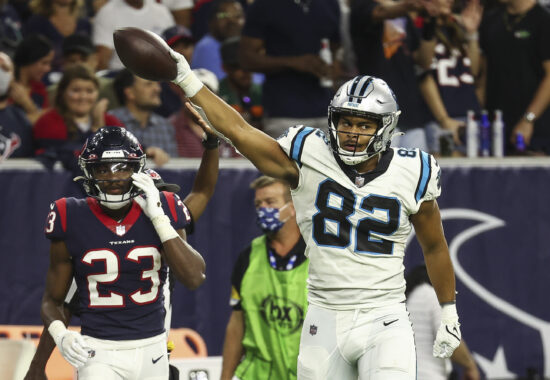 Christian McCaffrey will be out for some time following a nasty hamstring injury he picked up on Thursday Night Football. Also, the rookie Jaycee Horn broke his leg and will be out for a substantial period.

Tampa Bay Buccaneers defensive pylon, Jason Pierre-Paul, will miss arguably the most interesting match of the week. The champs visit the LA Rams on Sunday.

The Carolina Panthers opened the season with three wins, even though nobody predicted such a start for Matt Rhule’s boys. The latest one against the Houston Texans on the road, 24-9, came at a high cost, though.

One of the best running backs in the league, Christian McCaffrey, strained his hamstring and had to leave the game. Also, Jaycee Horn, this year’s 8th draft pick, broke his right foot and will potentially miss the remainder of the campaign.

These two players have been the biggest contributors in Carolina’s defense, along with reborn Sam Darnold, who was eventually the biggest reason why Panthers won the last night’s game.

After these injuries, the Panthers’ odds dipped a little bit. They were leveled with the Saints when talking about the chances of winning the division at +500 but are +600 following today’s news. Of course, Tampa is the No.1 here with -300, and the Falcons are +5000.

The line for the Panthers’ number of wins this year is 7.5 and over that limit +100, while under sits -115. A few days ago, this was different as well.

Bucs’ outside linebacker Jason Pierre-Paul won’t play against the LA Rams on Sunday. Head coach Bruce Arians spoke about that today, adding that the kick returner Jaydon Mickens is also ineligible for this event.

The situation surrounding Antonio Brown is, according to his words, “questionable,” and the Buccaneers might be heavily weakened against one of the biggest title contenders.

Pierre-Paul is one of the best defenders in the league, and his contribution to the last year’s title is enormous. In 2020 he had all 16 starts, 9.5 sacks, and 34 solo tackles. He also picked up two passes and forced four fumbles.

There is no doubt that the Buccaneers’ defense will be under enormous pressure in LA and that this absence might be crucial in this event.

Tampa is coming into this event as a slight favorite, with the odds on their victory set at -115. Meanwhile, the Rams are currently sitting at +110, with the odds slowly shortening.

The uncertainty surrounding Antonio Brown’s status will be resolved in the upcoming 24 hours, and if the Bucs lose him for this contest, the odds will further change.

Currently, Tampa Bay is the second favorite for the Super Bowl title, +650, while Rams and Bills sit right behind with the same prospects, +1200. This will be the first major test for both sides, making it even more interesting.