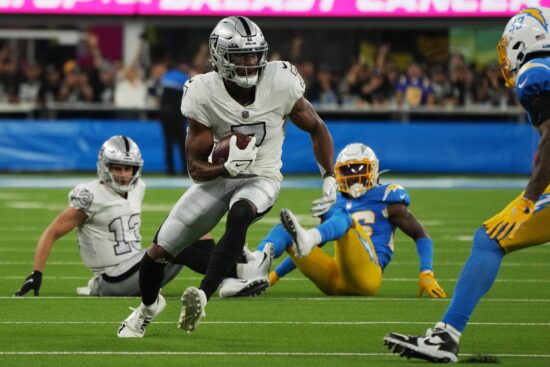 Last week, the Chicago Bears got back to .500 on the season with a win, while the Las Vegas Raiders suffered their first loss of the 2021 NFL season.

This week, the Bears and Raiders will play one another, with Chicago looking to get above .500 and the Raiders looking to avoid two straight losses. And with one of the highest-profile rookie quarterbacks set to start this game for Chicago, there is an added layer of intrigue for this one.

The biggest story for the Chicago Bears heading into this game is the announcement that Justin Fields will be their starting quarterback going forward. Bears head coach Matt Nagy made that announcement this week after Fields led Chicago to a win over the Detroit Lions last week. This week, however, will be tougher for Fields and the Bears than last week was against a Detroit team that is now 0-4.

Making things even more difficult for the Bears this week is the fact that David Montgomery is set to miss the game with a knee sprain. Montgomery was excellent last week for the Bears, and the loss of their top running back will force the Bears to rely more heavily on their rookie quarterback. Against a Las Vegas team that has looked strong at home thus far, the Bears may really feel the impact of Montgomery’s absence.

Raiders Must Respond To First Loss

After a 3-0 start for the Las Vegas Raiders, the Los Angeles Chargers delivered them their first loss of the year on Monday Night Football in Week 4. Las Vegas went behind 21-0 in the first half, cut their deficit to seven points, but could not complete the comeback in what turned out to be a 28-14 contest. This week, Las Vegas will look to get back on track and take advantage of their matchup with an unproven rookie quarterback.

Also working in favor of the Raiders in this game is the fact that they are back at home, where they are 2-0 so far this season. Vegas has beaten the Baltimore Ravens and Miami Dolphins in their two home games this season, with both of those games being won in overtime. Against the worst offense they have played so far this year, the Raiders will look to get a home win in regulation for a change.

The combination of Fields starting and Montgomery being out for the Bears this week is a combination that does not bode well for Chicago. The Raiders and their respectable pass rush should be able to put pressure on Fields, who has been slow in reading defenses and getting the ball out so far.

The Raiders will win this game and cover the spread to move to 4-1 on the year.