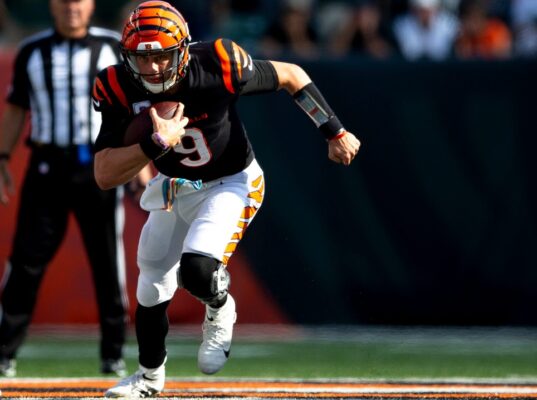 Two wounded teams will clash in Motor City. The Bengals are still haunted by all the missed field goals in their match against the Packers. On the other side, Lions fans can’t get over the fact that they had the division rival on the road.

This is a chance for both to correct the mistakes from last weekend.

Mentality Test for the Bengals

The loss against the Packs was very, very painful. We definitely are aware of that, and we do understand the Bengals and their grief. But hey, this is the NFL, and they have to get over it quickly. Otherwise, they are going to lose one more game. So this is the test of their mental strength.

We saw Joe Burrow leading his offense like a boss against the Packers. We saw his colleague teammate Ja’Marr Chase flashing his potential and appearing in the crucial plays. We also saw Joe Mixon pounding and the defense making stops on the league MVP.

What we need to see is their consistency. Burrow’s 11 TDs so far are great, but six picks are problematic. Chase has 456 yards and 5 touchdowns, but he has to appear more on first and the second down. If they correct this, the Bengals are in the playoffs. Believe us when we say that.

Lions so Close, But so Far

The last three games Detroit lost could have gone in their favor as well. If there was a little bit more luck on their side, the 54-yard field goal attempt Greg Joseph took could go wide, and the Lions would celebrate their first win of the campaign. After all, we saw how many, five, six missed kicks in Cincinnati, and just one in Minneapolis.

Some 37 seconds before the end, D’Andre Swift carried the ball into the end zone, and after that, Goff hit KhaDarel Hodge for a two-point conversion to give the Lions a 17-16 lead. Soon after, a big disappointment hit them.

The Lions aren’t that bad as much as they don’t have any luck. But at some point of the year, that should come back. Though, we need to say that they have to improve the rush defense, as they allow 130 yards per game.

Bengals vs Lions Head to Head

The Bengals have a positive record against the Lions, winning nine and losing three games.

Our pick here would be the Bengals because they have a more versatile attack and much more consistent performance in that particular area than the hosts. Burrow can mix things much more often than Goff, and that will be the difference-maker on Sunday.

Expert pick against the spread: