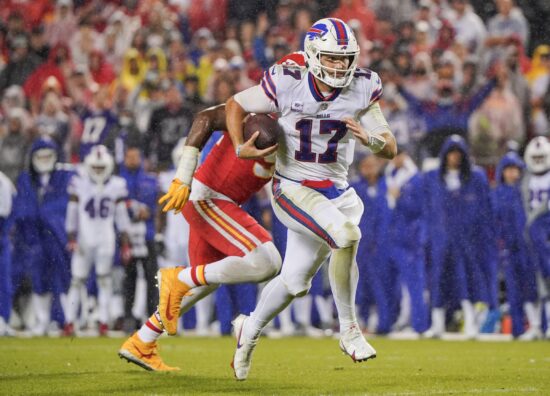 The Buffalo Bills will travel to Nissan Stadium on Monday night to take on the Tennessee Titans in a Week 6 matchup. The Bills are 4-1 and are tied for the top-seed in the AFC as they are coming off a 38-20 road win over the Kansas City Chiefs.

Josh Allen went 15-of-26 for 315 yards with three touchdowns. The Titans are 3-2 and are leading a brutal AFC South as they are coming off a 37-19 road win over the Jacksonville Jaguars. Ryan Tannehill went 14-of-22 for 197 yards with a touchdown.

Can You Diggs It?

The Buffalo Bills love to throw the football, and a big reason is the play of wide receiver Stefon Diggs. So far this season, he has 28 receptions for 374 yards (13.4 yards per catch) with a touchdown.

In his last game against the Chiefs, he had two catches on five targets for 69 yards (34.5 yards per reception). If he can be more involved in the passing game here, it will do wonders for the Bills’ offense.

The Buffalo Bills have been playing excellent defense as they are allowing 12.8 points per game. In their previous game against the Kansas City Chiefs, they gave up 20 points on 392 total yards of offense (272 passing, 120 rushing).

The defense did a great job limiting an incredible offense to 5.0 yards per play. Buffalo needs to improve against the run as they allowed Kansas City to run for 5.2 yards per carry. If the Bills can sure up a little defensively, they will be in a great spot.

The King and I

The Tennessee Titans love to run the ball down their opponent’s throats, and having a running back like Derrick Henry doesn’t hurt. He so far has 142 rushes (1st) for 640 yards (1st) with seven rushing touchdowns (1st) while also adding 14 catches for 125 yards through the air.

In his last game against the Jacksonville Jaguars, Henry finished with 29 carries for 130 yards (4.5 yards per run) with three rushing touchdowns. If he can carry some momentum over to this game, it’ll be hard to stop him.

The Tennessee Titans need some work defensively as they have given up 26 points per game. In their previous game against the Jacksonville Jaguars, they allowed 19 points on 454 yards (256 passing, 198 rushing). They did a good job defending the red zone as the Jags scored on three of five drives that ended there.

They do need to limit big plays as Jacksonville averaged 6.9 yards per play throughout the game. If Tennessee can sure up defensively, they would be a difficult team to beat.

Who wins the Bills vs Titans game tonight:

Ryan Tannehill isn’t going to beat the Buffalo Bills himself, and all the attention defensively for the Bills will be on running back Derrick Henry. Buffalo has been incredible defensively this season, allowing less than 13 points, while Tennessee is giving up more than double that.

The Bills are fully healthy, while the Titans are dealing with some injuries. All in all, go with the Buffalo Bills -5.5 here.