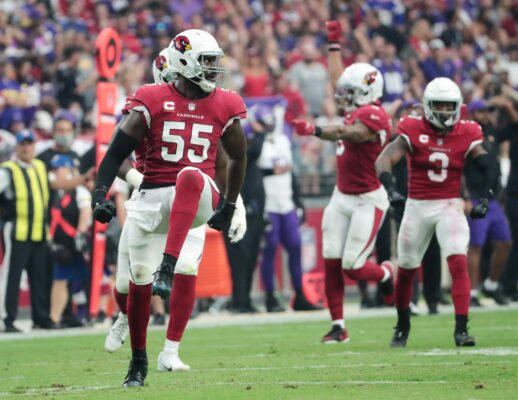 It’s been a rude awakening for new Jacksonville Jaguars head coach Urban Meyer as he has started his NFL career 0-2. Meyer recently referred to the professional game similar to “having to play Alabama every week” and things don’t get any easier with the 2-0 Arizona Cardinals coming to town. Kyler Murray has led Arizona to become the #2 scoring team in the league after two weeks, a big reason why the Cardinals are -7.5 road favorites here.

Murray Doing It All

The Cardinals defense had their share of issues in last week’s 34-33 home win over the Vikings, but it’s hard to fault anything the Arizona offense is doing right now. Murray threw for 4 TDs and ran in another in the Cardinals’ season-opening win over the Titans and added another 3 scores and 400 yards passing vs. Minnesota in week 2.

Arizona seems to find a new weapon every week, most recently with Murray hooking up for a 77-yard TD pass to rookie Rondale Moore. Moore and Maxx Williams each had 7 catches vs. the Vikings, and you know your offense is clicking when the team can score 34 points even though Deandre Hopkins had just 4 catches for 54 yards. Christian Kirk had 2 TD catches in week 1.

It should be another big afternoon for the Cardinals offense as Jacksonville comes into this game ranking 29th defensively in total yards allowed (423.5), 27th in pass defense (295.5), and 25th against the run (128.0). The Jags’ gave up 37 points to the Texans in the season opener.

Can Lawrence and Meyer Get Into the W Column?

The Jaguars haven’t looked great through two weeks, but there’s a chance they catch Arizona in the look-ahead game on Sunday. The Cardinals are on the road in Duval County and have huge division matchups at the Rams and at home vs. the 49ers the next two games.

Despite the (college) pedigree of Meyer and #1 draft pick Trevor Lawrence it’s not entirely unexpected that the Jaguars are 0-2 right now. Lawrence is going to take some licks as he transitions from college to the pros but did look good with 332 yards and 3 TD in the season opener but that also came with 3 INTs. Lawrence completed just 14 of 33 passes last week with a TD and 2 INTs.

Lawrence has faced defensive gurus Lovie Smith and Vic Fangio in his first two NFL games, but Vance Joseph’s Arizona scheme isn’t exactly a walk in the park. Joseph drew up a game plan for 5 Chandler Jones sacks in the series opener, and the Cardinals had the 10th best defense vs. the pass last season.

Kyler Murray has been outstanding through two weeks and Teddy Bridgewater burned the Jaguars defense for 328 yards and 2 TDs last week. Arizona gave up a pile of yards last week to the Vikings though, and with the Cardinals looking ahead to a couple of divisional games in the next two weeks Jacksonville can keep this one within a field goal.