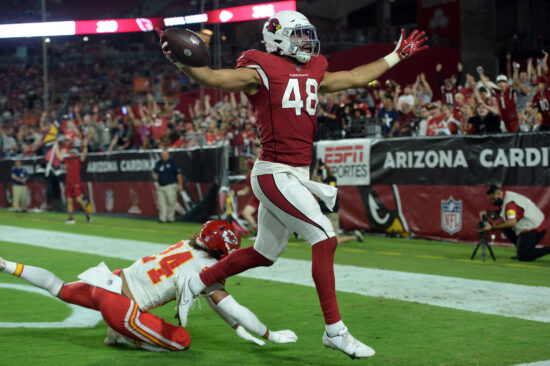 The Arizona Cardinals are looking to get to the postseason this year, after failing to do so last season. Meanwhile, the Tennessee Titans are looking to get back to the playoffs after getting bounced in the first round last year. Both teams will have a chance to take a strong first step toward those goals when they face off in Week 1 of the 2021 NFL season on Sunday.

Cardinals Looking to Improve in 2021

Last season, the Arizona Cardinals finished the regular season with an 8-8 record and missed the playoffs despite a positive point differential for the year. This season, with Kyler Murray and an explosive offense back, the Cardinals are hoping to see some progression as they hope to end the year with a winning record. And with the addition of players like JJ Watt on defense, that goal feels very attainable.

For Arizona, the key to this game is going to be slowing down the aerial attack that the Tennessee Titans have built. Stopping both AJ Brown and Julio Jones is no easy task. But the Cardinals are capable of doing so if Watt and the rest of their pass rush can create pressure on Ryan Tannehill in passing situations.

Last season ended in disappointment for the Tennessee Titans, as they made the playoffs and were immediately bounced by the Baltimore Ravens in the first round. This year, they made a big move to strengthen their aerial attack, bringing Julio Jones over from the Atlanta Falcons. But the question for this Titans team is not whether they can score enough points to win games, but whether their defense has what it takes to stop opponents consistently.

In 2020, the Titans gave up more points than any other team that qualified for the playoffs. This year, Tennessee is hoping that the acquisitions of Bud Dupree and Janoris Jenkins will help them to avoid being involved in such high-scoring games on a regular basis. And the Titans will get a good litmus test for the effectiveness of their revamped defense on Sunday, as they take on a Cardinals team that has a dynamic quarterback along with plenty of talent in their receiving corps.

Who will win Sunday’s Cardinals vs Titans game:

While the Tennessee Titans should improve on defense this season, Week 1 is too soon to expect them to play at their best. Their newly acquired defenders will need time to develop a rapport with the rest of the defense, and the Cardinals should be able to take advantage of the time it takes for that to happen. Expect a lot of points here, and for Kyler Murray to be standing tall when this game is finished.