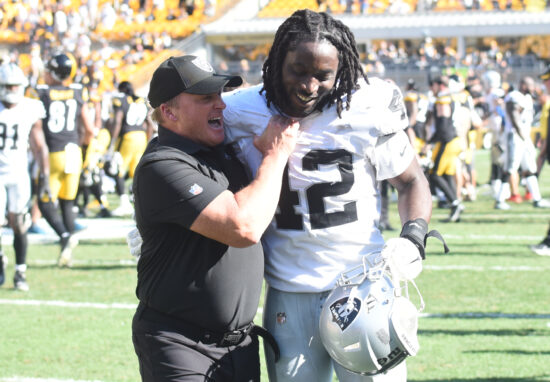 The Miami Dolphins will have to turn to a backup QB even as they may have to get into a shootout with the #1 passing team in the league in the Las Vegas Raiders. Tua Tagovailoa has been ruled out in this game with a rib injury, so experienced starter Jacoby Brissett takes over in his place. It’s going to be the Miami offense that has the toughest role in this one though, visiting the Raiders who are averaging 391.0 yards/game through the air.

Brissett does have 32 starts in his 6-year NFL career, but none have come since 2019. He stepped in last week after Tagovailoa’s injury and went 24/40 for 169 yards with an INT. The Dolphins have some weapons on the outside in Devante Parker and Jaylen Waddle, and maybe Brissett can better take advantage of that practicing with the starters this week.

Ideally, Miami could get a running game going so that the team wouldn’t have to rely on the passing game, but the Dolphins are putting up just 72.5 yards/game on the ground. Those numbers rank 27th in the NFL, but the 165.0 yards/game through the air is 30th in the league. Miami is also the NFL’s worst scoring team with a mere 8.5 ppg.

It’s looking pretty obvious that Miami is going to have to win this one in the low-scoring 20-17, 17-14 range. The Dolphins allowed 35 points to the Bills last week which looks bad on the defense, but it was really the offense’s undoing. Brissett tossed an interception, Waddle and Jakeem Grant lost fumbles, and the offense had four other turnovers on downs.

Raiders Rolling Through the Air

Derek Carr has been great through two weeks for the Raiders. Carr threw for 435 yards (56 attempts) with 2 TDs to lead the OT win over Baltimore in the opener and piled on another 382 with two more TD passes at Pittsburgh last week. The Raiders are 2-0, winning both games as underdogs but now they have to try to keep that success going as -3.5 favorites.

Darren Waller has been great with 15 catches so far, Henry Ruggs III is showing big-play potential with a 37 and a 61-yard catch so far, and Hunter Renfrow is a reliable slot receiver with 11 catches so far. That being said the Raiders have been very one-dimensional through two weeks averaging just 67 yards/game on the ground. Josh Jacobs is battling an ankle injury and is questionable here.

The Raiders defense has looked good through two games holding Baltimore to under 200 rush yards which is hard to do and keeping Ben Roethlisberger under 300 passing yards last week which is the goal. The Steelers had just 39 yards on the ground in week 2 as well.

This line of Las Vegas as just -3.5 favorites raises some major red flags because it feels like a TD game at least. It’s possible the Dolphins play better under Brissett than Tagovailoa, it’s what they did at times last year when Ryan Fitzpatrick was with the team. No games in the NFL are this easy as the Raiders look here.