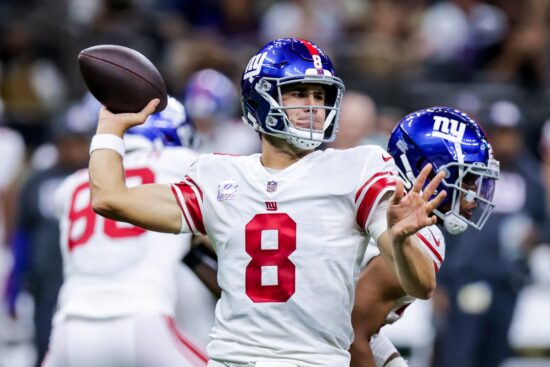 One of the best rivalries in the NFL will be renewed on Sunday, as the New York Giants and Dallas Cowboys will square off in Week 5. Last year, this was the game in which Dak Prescott suffered a season-ending injury.

This time around, the Cowboys will look to get revenge on the Giants while picking up a fourth straight win to put themselves in a favorable spot in their division.

Last week, the New York Giants picked up their first win of the 2021 NFL season when they came back to beat the New Orleans Saints in overtime. The Giants got a huge game out of Daniel Jones, who threw for over 400 yards and made several big plays down the field for the Giants. Now the Giants will look for their first win in the division of the year, which could turn them into a contender in the NFC East.

For the Giants, the question in this game will be whether or not they can slow down Dak Prescott and the Cowboys’ offense. New York’s defense looked good last week against the Saints, but they have struggled against the Broncos and Washington Football Team already this season. How they play against the red-hot Cowboys on that side of the ball will likely decide the outcome of this game.

Cowboys On Fire At Home

The Dallas Cowboys have won two straight games at home and are looking to collect a third straight home win this week. They have eaten the Philadelphia Eagles and Carolina Panthers in back-to-back contests, which has elevated the Cowboys to 3-1 on the season. This week, the Cowboys will have revenge on their mind against the Giants, who drastically changed the 2020 season for the Cowboys.

Last year, the Giants knocked Dak Prescott out of their game in Dallas, with the injury to Prescott ending the season of the Cowboys’ starting quarterback. This year, Prescott is back and is playing at an MVP level through the first four weeks of the season. While Dak is unlikely to seek revenge specifically against the Giants in a game like this, his play on the field could certainly provide revenge against Dallas’ division opponent.

The Giants tend to be a better team on the road than at home, but the Dallas Cowboys should be in a good place to play well in this game. In their third straight game at home, the Cowboys will come out and punish the Giants after what took place last season.

Expect the Cowboys to not just win this game but to cover the spread in the process to plant their flag as the class of the NFC East.