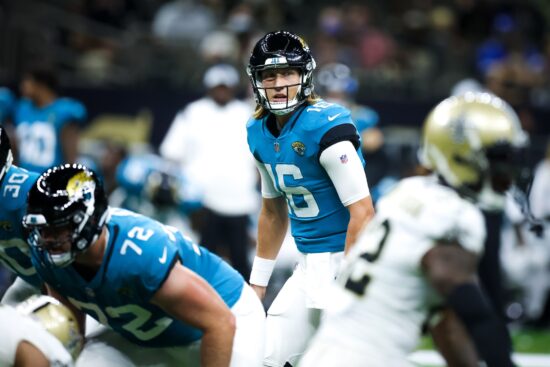 Does a game ever look too easy – because that’s not a good thing in NFL betting. The Jacksonville Jaguars are -3 point favorites in the season opener, and granted they were 1-15 last season, but seem to have everything going for them in this matchup on the road against the Houston Texans. Houston is supposed to be the worst team in the league this year according to their 300:1 Super Bowl odds, but does the skeptic in you see them taking this game?

The Jaguars turn to #1 overall pick Trevor Lawrence to try and bring his winning ways from Clemson over to Duval County. If winning is a mentality, Jacksonville is also in good hands with Urban Meyer making his NFL debut. Meyer won two National Championships in college, and never had a losing season over 17 years as an NCAA coach.

There almost seems to be no better matchup for Lawrence, Meyer, and the Jaguars to dip their toes in the NFL waters. The Texans had the worst rush defense in the league last year, and were 30th overall defensively in giving up 416.8 yards/game. The Jags can get their run game going behind James Robinson (1070 yards in 2020), and Lawrence has some weapons with DJ Chark and Laviska Shenault, Jr. – both 2nd round draft picks at wide receiver – as well as Marvin Jones who came in from Detroit.

Most people would assume the Jaguars offense is going to put up some points, but the danger is losing a 38-35 game because of their own defense. Jacksonville was in the bottom five in every major defensive category last season, and gave up over 30 ppg.

Texans Try to Do… Something

It would be a little more risky betting against Houston as 3-point home underdogs if the Texans had Deshaun Watson under center for the opener. Watson threw for 4800 yards last year with 33 TD and 7 INT – but could be out for the year after being investigated for numerous sexual assault incidents.

With Watson out, Tyrod Taylor steps in probably with a chip on his shoulder after losing the Chargers starting job last year after having his lung punctured by an LA team trainer. Taylor has 47 starts in his career over 10 NFL seasons, but has started just 4 since 2018.

Some people think Houston can be good – if they were playing in 2017. There’s an Internet meme going around that most people can’t name more than two Texans players. The backfield is kind of retread with Mark Ingram, David Johnson, and Phillip Lindsay all fighting for carries – while Houston lost 3 of their top 5 options in the passing game over the offseason.

Jacksonville may be going to battle with a rookie coach – but so is Houston as 65-year-old David Culley makes his first-ever head coaching debut on any level. We may look back on this one and said the Jaguars should have been 8 or 9 point favorites – or say the Texans were an obvious contrarian play. Gotta bank on the proven winners.