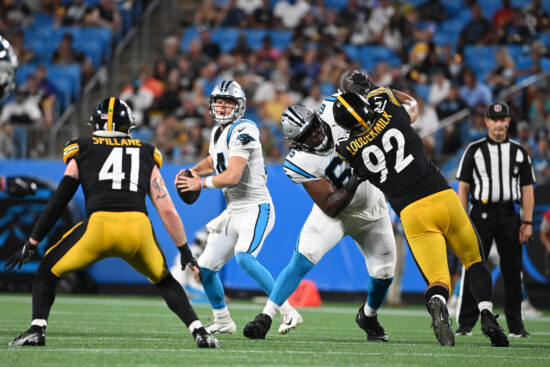 It didn’t take long for the New York Jets to get a glimpse of the old against the new as they start #2 pick Zach Wilson against a guy who they formerly took with the #3 pick in Sam Darnold. Darnold went off to the Carolina Panthers in the offseason, and by all accounts is projected for a huge 2021 campaign in an offense that is better suited to his skill sets. Carolina is a -4 point home favorite in this spot.

Is Wilson For Real?

Zach Wilson had a good 2019 campaign at BYU throwing for 2300 yards, but he really blew up in the 2020 season with nearly 3700 yards through the air to go with 33 TD to just 3 INT. That was enough to convince the Jets to move on from Darnold, and make Wilson their franchise QB as the #2 pick in the 2021 draft.

The Jets were just 2-14 last year, meaning Wilson doesn’t recruit a ton of talent for his NFL debut. His best wide receiver Jamison Crowder is questionable for Sunday being in COVID protocol, and the best running back on the New York roster might be rookie Michael Carter who is currently 4th on the depth chart.

New York also seems to be lining up three rookies in their starting defensive lineup. That’s not necessarily a bad thing for new coach Robert Saleh, who is one of the most enthusiastic motivators in the league based on his time as defensive coordinator with the 49ers. One would think Carolina’s head coach / offensive guru Matt Rhule would find a way to exploit the youth.

Sam Darnold is by far in a better place in 2021, going to an offensive-minded coach and to a Panthers team that appears to have a ton of weapons on offense. That doesn’t mean that Darnold doesn’t want a little revenge though, with Jets management basically labeling him a bust after completing less than 60% of his passes with 45 TD to 39 INT over his first three seasons.

There may be no player more invigorated than Darnold heading into the 2021 season opener. Not only does he get to face his former team, he’s got new toys at wide out in DJ Moore (1193 yards in 2020) and Robbie Anderson (1096) who put up huge numbers despite playing with the conservative Teddy Bridgewater at QB last year.

Rhule also gets his first full preseason to implement an offense after his rookie coaching exhibition was canceled in 2020. This gives Rhule more options to work in Christian McCaffrey – who is healthy after playing just 3 games last year (over 2300 yards and 19 TD in ’19-20) and wide receiver Terrace Marshall who was the highest-rated offensive rookie in the preseason.

Carolina is at home, playing with a healthy McCaffrey, and in a revenge game for new QB Darnold. The Panthers have a ton of weapons, and are going to surprise a lot of teams this year as long as the defense holds up its end of the bargain.