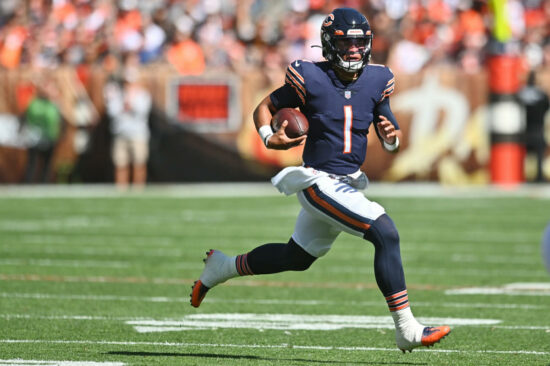 The Detroit Lions are looking to break into the win column for the first time in 2021 when they face their divisional foe the Chicago Bears on Sunday. The Lions have been close so far, losing by one score to San Francisco and just 19-17 last week against Baltimore. The Bears meanwhile are in disarray, giving up 9 sacks last week and facing uncertainty about who will be calling the plays on Sunday.

Lions With Their Best Opportunity

Detroit split the series with Chicago last year, but both of these teams look very different from their 2020 versions. For the Lions that means the coaching change to Dan Campbell and the swapping of QB Matthew Stafford for Jared Goff.

Campbell is a fiery guy who has the Lions playing with a different attitude so far this season. They lost 41-33 to the 49ers in the opener in a game that wasn’t that close, but the Lions did show resilience fighting back from a 41-17 deficit. Detroit was also up 17-14 to Green Bay at the half in week 2 before falling 35-17. The Lions seem like they’re close to putting together a complete game, up 17-16 on the Ravens before Justin Tucker hit an NFL-record 66-yard field goal to give Baltimore the 2-point win.

Goff has played well in completing 70% or better of his passes the last two weeks. Detroit has a couple versatile backs in D’Andre Swift and Jamaal Williams who have combined for 244 yards and 3 TD rushing as well as 32 receptions. TJ Hockenson is emerging as an elite TE too, having a couple 8 catch games this season.

Chicago’s defense has played well the last two weeks, but it really doesn’t matter if their offense can’t get right. The Bears were blown up for 9 sacks against the Browns last week in the 26-6 loss. Rookie Justin Fields was just 6 for 20 passing vs. Cleveland, but hard to blame him when there’s no time to throw.

Chicago thinks they have one of the better backs in the league in David Montgomery, but they sure don’t like to use him. Montgomery had 108 yards in the opener against the Rams but on just 16 carries. Montgomery carried the ball just 10 times last week against Cleveland, which is why Bears fans have been clamoring for a change in the play calling duties from Matt Nagy to offensive coordinator Bill Lazor.

With all their offensive woes, Chicago’s defense can keep them in Sunday’s contest. For all the sacks the Bears gave up last week, they also brought down Baker Mayfield five times as well. In week 2 Chicago had 3 INTs against Joe Burrow, with Roquan Smith returning one of those 53-yards for a TD.

Even though they are 0-3 on the season, the Lions have actually looked better than the Bears this year. Chicago fans are getting restless, and this is going to feel more like a home game for Detroit as the boos from the crowd rain down on Soldier Field.