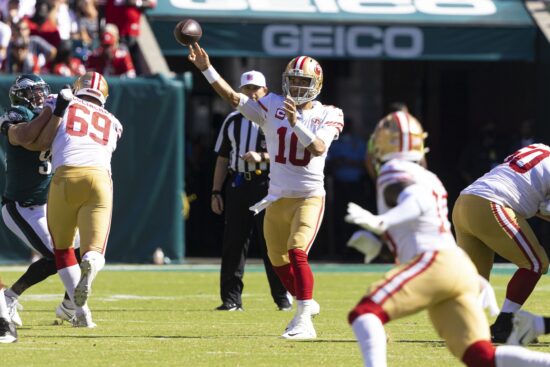 The Green Bay Packers and San Francisco 49ers are two of the most historically successful franchises in NFL history. And with plenty of recent playoff history between the two teams, there is no love lost when they get together. This week, these NFC title contenders square off on Sunday Night Football, with major implications for both teams depending on how they play in this contest.

Packers Look to Prove Themselves

After the Green Bay Packers were demolished in Week 1 by the New Orleans Saints, they took advantage of their opportunity to get right against the Detroit Lions. Powered by a huge second half, the Packers comfortably defeated Detroit to get to 1-1 on the season and temporarily quiet any doubters. But that was far from a flawless performance, and the Packers will need to play more consistent football to beat San Francisco.

The big problem for the Packers against both the Saints and Lions was their defense. On Monday night against Detroit, the Packers let Jared Goff complete 10 of his 13 pass attempts in the first half, with the Lions’ quarterback completing two touchdown passes in the first 30 minutes of play. Against a more well-rounded Niners offense, the Packers cannot afford to let Jimmy Garoppolo get into a similar early rhythm.

49ers In For a Litmus Test

Any road win in the NFL is impressive, especially when they come in back-to-back games. But the San Francisco 49ers beat the Detroit Lions and Philadelphia Eagles on the road to kick off their season. This week, they face a much tougher test as they are tasked with slowing down Aaron Rodgers and the Packers, who are miles better than the competition San Francisco has faced so far.

Pass defense is always the key to a game against the Packers during the Rodgers era. But that is even more true for the 49ers in this game, as they are without likely their best cornerback in Jason Verrett. Without Verrett, the Niners will have to find a way to stop Davante Adams, who found his groove last week as he broke 100 yards receiving against the porous Detroit defense.

The 49ers have yet to be tested, but they should come out hot in their home opener en route to a victory over a Green Bay team still finding its footing. Expect the 49ers to win this game and cover the spread en route to a 3-0 record to start the 2021 NFL season.