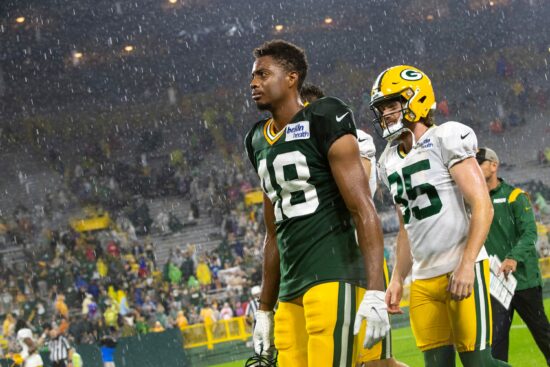 The Green Bay Packers and Buffalo Bills have had noticeably different preseasons in 2021. The Packers are 0-2, failing to get extended reps for their backup QB Jordan Love. Meanwhile, the Bills have gone 2-0, and seem to have solidified their 2nd string signal-caller position with the landing of Mitchell Trubisky. Buffalo is up to a -9.5 favorite, almost unheard of in a preseason game.

The good news for Green Bay is that Jordan Love will likely see some playing time on Saturday. The 2nd year QB was robbed of preseason snaps in his rookie season due to COVID and then banged up his knee after going 12/17 for 122 and a TD vs. the Texans in the preseason opener.

Love’s playing time will be limited on Saturday, but that’s OK with Green Bay management who want to see more from Kurt Benkert. The undrafted, 4th year QB out of Virginia has looked good this preseason, going 8/12 for 88 yards vs. the Texans and started last week vs. a good Jets defense going 18/25 for 151.

Perhaps the main reason the Packers are +9.5 underdogs Saturday afternoon is likely because of their defense. The team switched from Mike Pettine to Joe Barry in the offseason, and the team has struggled to pick up the system. Granted it’s only been two preseason games with limited starters playing, but the Packers are giving up 25 ppg. The Bills also scored 41 last week.

Can Bills Get the Dominating Win?

Buffalo blew out the Bears last week in a comforting return to Chicago for Trubisky. The former #2 pick showed a full grasp of Brian Daboll’s offense in going 20 of 28 for 221 yards. Expect a lot of Trubisky again on Saturday, but the Bills have also announced a lot of starters will see time.

Josh Allen will be in for one or two series vs. Green Bay, Sean McDermott told the media this week. McDermott also said that a majority of the team’s other starters will see a bit of playing time, and as a result, the line has moved from BUF -4 to BUF -9.5.

The Bills defense has looked good this preseason, giving up just 9 first-half points through two games. Buffalo did give up a 73-yard jump ball TD to Chicago last week, but besides that play they held the Bears to just 139 through the air. That includes 9 for 19 for 80 yards to rookie Justin Fields, who has just as much NFL experience as Green Bay’s Jordan Love.

It’s very possible that Buffalo pulls away in this one as they search for the undefeated preseason. That being said, 9.5 points is just too much to give in an exhibition game. Love is supposedly healthy for the Pack, and he could get a full half to play.