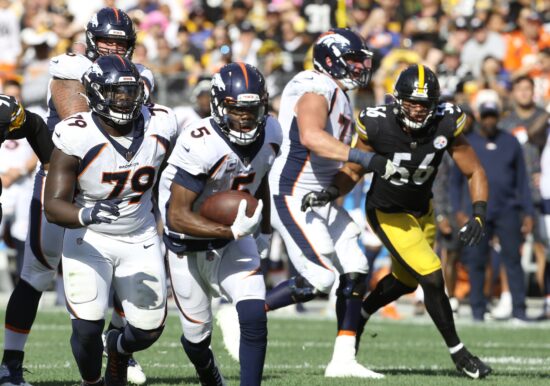 Two AFC West teams that surprised with fast starts square off to try to get back on the winning track. The Raiders have dropped two in a row in the midst of the controversy of Jon Gruden being removed as a head coach recently.

The Broncos have also lost two straight but are hoping their defense can lead the way in their quest for an end to that streak. The loser of this game could drop to last in the division standings, so it’s an important contest for both teams.

Can Raiders Move On?

The Raiders have been dealing with a lot of off-the-field controversy of late, with Gruden being replaced as head coach following controversial e-mails. Rich Bisaccia is now the interim coach and needs to get his team focused on the field.

Quarterback Derek Carr has been solid, throwing for 1,605 yards and eight touchdowns, but he’s also been sacked 15 times. The offensive line must protect him better against a strong defense of the Broncos.

The Las Vegas running game has struggled due to injury to Josh Jacobs (122 yards, three TDs). Jacobs is expected to play in this one, which would be a big plus if he can get going and balance the team’s offensive attack.

The Broncos have been very good defensively, holding opponents to just 15.2 points per game to rank second in the NFL. The problem is, Denver’s offense has been relatively quiet, putting up 20.4 points per game, including a total of 22 points over the last two games.

Quarterback Teddy Bridgewater was hurt in Week 4 against Baltimore, but he came back to play against Pittsburgh last week, completing 24-of-38 for 288 yards and two touchdowns. His presence in the pocket makes Denver a much better team, even with the multiple injuries the team is dealing with in the receiving corps.

Running back Melvin Gordon III will be a key in this one as well. Gordon leads the Broncos with 282 yards and two touchdowns, and if he can get things going against the Raiders, it will open up the passing game that much more.

The Raiders are having trouble protecting Carr, which should have Von Miller and the rest of the Broncos defense ready to get into the backfield as often as possible. Bridgewater should be able to get Denver some points, which will be enough to send the Raiders to a third straight loss.

The Broncos give their long-time rival Raiders another setback with a win that covers the spread.