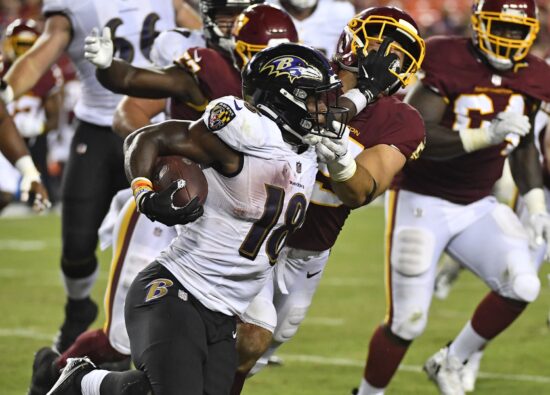 The Baltimore Ravens will be the first team to visit the Las Vegas Raiders’ Allegiant Stadium with a full crowd in attendance as they kick off the 2021 season there on Monday Night Football. While the Ravens were a championship contender last year, they will have to contend with several key injuries heading into this season. The Raiders, meanwhile, will look to get back to the postseason after missing out last year.

Injuries are typically unavoidable over the course of an NFL season, as the physical nature of the game takes its toll on every team. But the Baltimore Ravens suffered several key injuries before the start of the 2021 season, with numerous key players missing the year due to ailments sustained in practice. As they head into Las Vegas for their season opener, the Ravens will look to solve their personnel problems on the fly.

Lost for the season already in Baltimore are running backs JK Dobbins and Gus Edwards, along with cornerback Marcus Peters. All three players were poised to play a crucial role for the Ravens this season but will no longer be able to do so. That means that more pressure will be heaped on top of Lamar Jackson and the rest of the healthy members of the Ravens’ roster, which could be a problem as the year wears on.

For the Las Vegas Raiders, the Jon Gruden hire has yet to yield any meaningful playoff runs. But the Raiders will look to fix that in 2021, as they have a roster more suited to the liking of the coach they inked to a 10-year contract. The question now is whether or not Gruden, his staff, and his players can all execute at the level that they need to in order to make the postseason.

If Las Vegas is going to make the playoffs this year and beat the Ravens in Week 1, they are going to need Derek Carr to play inspired football. Carr is nearing the end of his contract with the Raiders, and his future with the team and in the league as a whole will depend on how he plays over the next two seasons. Against a formidable opponent in the Ravens, Carr will look to get off on the right foot here.

With all of the injuries to members of the Baltimore Ravens already, they are not going to come into this game with a completely clear plan of attack. They will figure things out with their personnel in the weeks to come, but there will be some growing pains here in the opening week of the season. Expect the Raiders to come through at home and cover the spread on Monday Night Football.