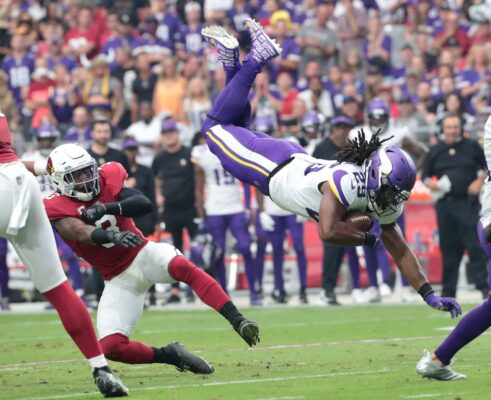 The Seattle Seahawks and Minnesota Vikings both suffered painful losses in Week 2 of the NFL season. Now, they have a chance to bounce back against one another in Week 3, in a game that has massive implications for both sides. A loss for either team would put them behind the eight ball in terms of keeping up in competitive divisions in the NFC.

Last week, the Seattle Seahawks held a commanding lead against the Tennessee Titans for most of their Week 2 matchup. But the Seahawks fell apart in the second half, allowing the Titans to tie the game late in regulation and win it in overtime. Now, the Seahawks are in as close to a must-win game as a team can be in that early in the season, as a loss would put them in a bad spot in a division with three undefeated teams.

For Seattle, moving the ball with Russell Wilson is not the problem. Instead, it has been the Seattle defense that has let them down so far this season, as the Seahawks struggled to consistently slow down the Titans’ multi-faceted attack. Against a Minnesota team that can also hurt opponents with the run and the pass, the Seahawks will be tested once again on the defensive side of the ball.

The Minnesota Vikings have been competitive in both of their games so far this season, with both of them coming down to the final seconds of action. But Minnesota has lost both of those contests, losing in overtime to the Bengals and missing a last-second field goal that would have beaten the Cardinals. This week, the Vikings aim to end their losing streak and avoid a third consecutive crushing defeat.

If Minnesota is going to avoid another devastating loss, their defense will also have to be better than it was last week. The Vikings allowed 34 points and 474 total yards to the Cardinals last Sunday. Against a Seattle team that is more than capable of running up big offensive numbers, that type of performance could lead to more anguish in Minnesota.

This game should be closer than many expect, as the poor defense by both teams so far this year should help keep each side competitive throughout.

Seattle should come away with the victory to improve to 2-1 on the season, but it isn’t going to be easy by any stretch of the imagination. Instead of taking a side in this game, bettors should think about betting the over, as this game has the makings of another track meet.