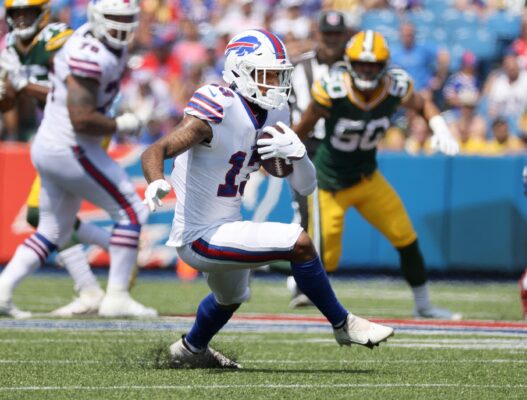 The Pittsburgh Steelers and Buffalo Bills both made the playoffs last season and are both on the shortlist of contenders to get there again. Their schedules start with a huge test in Week 1, as they face one another in Orchard Park with a chance to get their year off to an ideal start. But with plenty of talent on both sides of the ball for both teams, this game could go either way.

Last season, the Pittsburgh Steelers went to Buffalo for a road game against the Bills and were outclassed by the eventual AFC Championship Game participants. This year, Pittsburgh is hoping that some offseason improvements will help them to achieve a different result in Buffalo. If they are going to get a win against the Bills this time around, an improved rushing attack will be a big reason why.

Pittsburgh brought in Najee Harris from Alabama to be their starting running back this season, taking him in the NFL Draft to get their rushing attack in order. The question for Pittsburgh is whether Harris will be enough to offset a turbulent offseason for the Steelers’ offensive line. With Pittsburgh having to replace David Decastro, Alejandro Villanueva, and Maurkice Pouncey in one summer, one has to wonder how equipped the Steelers are to block a stout Buffalo defense.

The Buffalo Bills came up one game short of the Super Bowl last season, making this year a critical one for the franchise. There isn’t much room to improve on last season’s performance, but a step backward could be devastating to the growth of the team. In Week 1 against the Steelers, Buffalo will look to establish more of what got them so deep into the playoffs last season, as their offense looks to set the tone against a solid Pittsburgh defensive unit.

If Buffalo is going to overcome the Pittsburgh pass rush, it will have to be the result of Josh Allen making good decisions under pressure. Allen enters this year as a legitimate MVP candidate after completing around 70% of his passes in 2020. But against the pressure that the Steelers like to bring at opposing quarterbacks, Allen will not be able to afford to revert to his old turnover-prone ways.

In this game, the offensive line issues for the Steelers are a major concern, as they will have trouble executing their assignments and communicating effectively in a loud and hostile environment. The Bills, meanwhile, didn’t make any notable changes this offseason and should maintain the level of consistency that they showed in 2020. The Bills will pick up a convincing win to kick off this season.