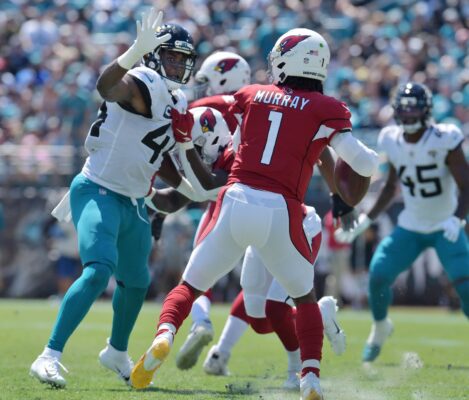 The Arizona Cardinals should have an easy task against the sorry Houston Texans, who aren’t that good on the road this year. Still, the matches like these are often the hardest, because the rival has nothing to lose, while on the other side, all the pressure is on the favorites.

Texans After No.1 Pick

If it weren’t for the win against the Jags in the opening round, the Houston Texans would be the top favorite for getting the first overall selection at the upcoming NFL draft. However, right now they will have tough competitions in Miami and Jacksonville.

Houston is beheaded this season when talking about their QB position. Not only are they without Deshaun Watson, but the guy who was supposed to replace him, Tyrod Taylor, picked up an injury and is on the IR right now.

The Texans average only 15.3 points per game, which is the second-worst in the league behind the Jets. Their passing game is the fourth from the bottom with only 207.2 yards per night, and when you put these two combined, it is obvious why they have such a poor record. Plus, their starting QB, Davis Mills, has five TDs and seven picks.

Cards Ahead of the Schedule

We knew before the season began that the Cards are going to be good. But to start 6-0… Well, we didn’t hope to see that. At the moment, Kyler Murray is the top favorite for winning the NFL MVP award, with the odds on him doing that positioned at +400. The youngster is fantastic so far, with 1741 yards thrown and 14 TD passes.

But that isn’t all. His QBR is third in the league, 67.6, and he has three rushing TDs. By the way, we need to say that the Cards played against some pretty nasty defenses, like the Rams’, Titans’ or the Browns.’

We also need to praise their defense a little bit. They held the opponents under 20 points on four occasions in six games, stopping a championship contender, Rams at 20 points exactly. Arizona’s takeaway differential is +8, having six picks and seven recovered fumbles, while losing the football only five times.

Texans vs Cardinals Head to Head

These two sides played only four times and the score between them is neutral with two wins each. The last meeting took place in 2017, when Houston won at home, 31-21.

Who will win tonight’s NFL Game:

This is a no-brainer. The Cardinals are the absolute favorites, and anything but their win is out of the question. The profits on the plain victory are too low, which is why we suggest betting on Arizona’s win with the offered spread, which is 17 at the moment. Even though it seems a bit too much, don’t be afraid, the Cards will cover this without any problems.