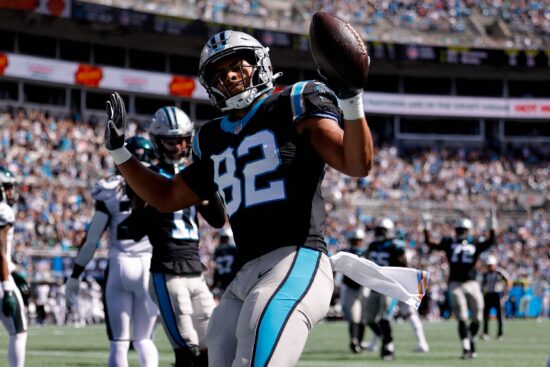 A win is a win has to be the motto in the Vikings locker room this week after a two-point win against the winless Detroit Lions. Carolina watched a 15-6 halftime lead dissipate as they went on to lose to the Eagles by a score of 18-21. Both teams are currently in third in their divisions, respectively.

Next Man Up Mentality

The Vikings have one of the premier running backs in the National Football League in Dalvin Cook. A breakout season in 2020 saw Cook rush for over 1,500 yards and find the endzone 16 times. Unfortunately for Vikings fans, Cook has been sidelined due to an ankle injury that has caused him to miss some time.

Luckily for the Vikings, they had Alexander Mattinson step up in a big way this past Sunday. Mattison rushed 25 times for 113 yards. He was also able to haul in all seven of his targets for 40 yards and a touchdown. Going forward, if Cook is healthy, he will be the primary ball carrier, but look for Mattison to get used more to try and keep Cook healthy.

Defensively, the Vikings were solid for three quarters, taking a 13-6 lead into the fourth. In the last five minutes of the fourth quarter, however, the defense surrendered 10 points in a matter of two minutes. Stopping the run will be the main focus of this week, as they allowed over 100 yards rushing to the Lions.

Fighting Out of a Losing Streak

The Carolina Panthers were the talk of the league after a Week 3 victory against the Texans. The 3-0 start was their best start since 2015, where they landed in the Super Bowl, ultimately losing to the Broncos. Unfortunately, things have taken a quick turn, and they have lost back-to-back games in Week 4 and Week 5.

Sam Darnold had seemed to be revitalized in Carolina, in the first three weeks throwing three touchdowns and only one interception. The biggest difference is the running game has not been great with the injury to Christian McCaffrey, forcing Darnold to throw the ball more.

In these past two weeks, Darnold has thrown five touchdowns, but he has also thrown five interceptions. If McCaffrey can play in Week 6, the Panthers will have a much better offensive product on the field.

Defensively, the Panthers had been solid all game, but they were on the field a lot. When your quarterback throws three interceptions, that means the defense has to come right back onto the field. When you look at the stats on paper from last week’s loss, the defense was great, allowing under 200 passing yards, under 100 rushing yards, and had two turnovers.

The biggest factor in this game is going to be the health of Christian McCaffrey. After a full week of practice last week, the Panthers seem to be very hopeful he will return to the lineup this week.

If McCaffrey plays, the Vikings defense struggles against the run, so expect him to have a big day and the Panthers to win.