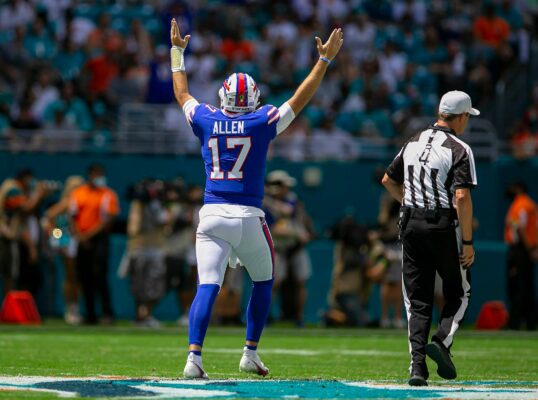 The Washington Football Team comes into Sunday’s game with extra rest after beating the Giants 30-29 last Thursday night, but it looks like they’ll need it against a Buffalo Bills team that had a 35-0 win over Miami last weekend. Buffalo looked like the Super Bowl contender many people expect them to be, bouncing back from a 23-16 loss at home to Pittsburgh in the season opener. WFT had their chances in week 1, but fell 20-16 to the Chargers.

Heinicke the Answer at QB?

Buffalo has a $250 million dollar QB across the sideline, but Washington likes what they’ve seen in their own guy former XFL-er Taylor Heinicke. Heinicke has stepped in for the injured Ryan Fitzpatrick (hip), picking up his first win as an NFL starter after throwing for 336 yards and 2 TDs last week vs. the Giants.

NYG isn’t exactly good coming off a 6-10 season last year and beginning 2021 0-2. That presents a much bigger challenge for WFT in week 2, especially the offense as they are up against a Buffalo team that pitched the shutout last week against Miami. Heinicke was 11/15 following Fitzpatrick’s injury in week 1 and has completed 73.8% of his passes through 1-1/2 games. Terry McLaurin is the real deal with 15 catches through two weeks, but WFT really needs to get their run game going after Antonio Gibson had just 13 carries last game.

Should Washington be a +7.5 underdog with a defense that has six sacks through two games? Josh Allen is a mobile QB for the Bills, but WFT had the #2 defense against the pass and in total yards allowed last season.

Is this the game that Buffalo starts to go on a run? The Bills probably should have won their season opener, outgaining Pittsburgh 371 yards to 252 and leading in time of possession 33:17 to 26:43. Having a punt blocked inside their own 10 in the 4th quarter doomed the Bills though, and it was the 20th straight point that the Steelers scored in the game.

Buffalo was able to get their record to 1-1 on the season with a 35-0 win over Miami on Sunday. The jury is still out on whether the Bills looked that good or if the Dolphins were just that bad? Miami lost their starting QB Tua Tagovailoa to a rib injury in the 1st quarter, threw an interception and lost two fumbles, turned the ball over on downs four times, and had 9 penalties for 83 yards.

Allen was also just 17 of 33 passing vs. Miami and was 30 of 51 vs. Pittsburgh. That’s just a 56% completion percentage through two weeks, and Buffalo hasn’t shown a commitment to the run with Devin Singletary getting only 11 and 13 carries in the first two games.

Heinicke has been an upstart for Washington, but Buffalo’s defense ranks 2nd in total yards, passing yards, and points allowed through two games and is 7th vs. the run. There’s film on Heinicke as a starter now too, and although the Washington defense could probably keep this one close it’s a different story for their offense.