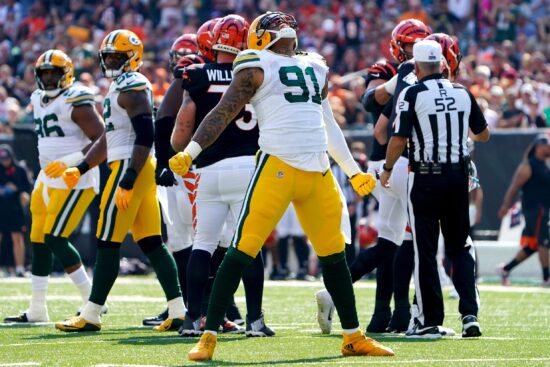 An overtime game against the Cincinnati Bengals was not what Packers fans expected in Week 5, but a win is a win in professional sports. The Bears looked great on Sunday, holding the Las Vegas Raider to just nine total points.

Packers Struggles to Put the Bengals Away

The Packers could not close the door on Sunday after several opportunities to put the Bengals away. The Packers got their lead up to 16-7 in the second quarter, then had it at 22-14 in the fourth quarter. The Bengals would not go away, however, and were able to force the game into overtime with just under three minutes left to play. The Packers would secure a victory with a Mason Crosby field goal in overtime.

Rodgers had another good day under center. He completed 27 of 39 pass attempts for 344 yards and two touchdowns. Aaron Jones also had a big day running the football, compiling 103 yards on 14 carries. The story of the day was Davantae Adams, who caught 11 passes for 206 yards.

Defensively, the Packers looked solid, holding the Bengals to just 22 points. The secondary came up with two interceptions and the defensive front allowed just over 100 yards rushing. The Packers also recorded three total sacks in the game. The defense will go up against another mobile quarterback in Justin Fields this week and will definitely try to get as much pressure on him as possible all game.

Chicago has Found Their Rhythm

Everything seemed to have click this past weekend in Chicago. The offense was able to put a few points on the board, while the defense was great all game. When a team is starting a rookie quarterback, there seems to always be that window of struggle, but coaches everywhere hope they can battle their way out of it. In Chicago, Fields looks to have figured some things out and has them moving in the right direction.

The play calling in Chicago seems to still want to keep Fields at the base for the most part. Sunday, he only had 20 passing attempts in the whole game, completing 12 of them for 111 yards and a touchdown. Another bright spot for Fields, he did not throw an interception this week. If he can continue to take care of the football, the Bears will have found their quarterback for the foreseeable future.

The Bears’ defense looked like the defenses of the past. They did not budge all game, allowing under 300 yards of total offense. While the Raiders may not be the best team in the NFL, offensively, they have always been solid, and the Bears took the challenge. With Aaron Rogers coming to town this week, they will have to try and be even better.

While it is easy to be excited about Chicago’s recent success, they have yet to play a top team. That chance will come this weekend with Green Bay, the number one team in the division, coming into Chicago.

The biggest issue the Bears will face is how to stop Adams. He is proving to be the best wide receiver in all of football and will be the best receiver this secondary has had to match up against. The Packers should win this game and cover the six-point spread.