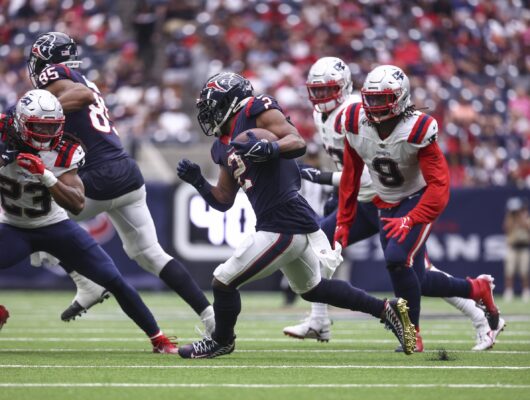 Just a rough weekend for both teams last weekend. Houston held the lead the whole game but was never able to get it to a score that was unreachable for the Patriots. A field goal with 30 seconds left would be the first and only lead for the Patriots. What happened in the fourth quarter of the Colts and Ravens games was truly remarkable. Unfortunately, the Colts came out on the losing side and will hope to regain before Sunday.

If there was one thing that Mills has to be better at this week, it is turning the ball over. In under 100 attempts, Mills has already recorded five interceptions. The Texans are missing the big weapons for their offense. Their running back room is subpar at best, and their wide receivers are all guys who have been in the league for five-plus years.

Defensively, the Texans have a ton of work to do. They are getting beat by average offenses, and good offenses are tearing them apart. Josh Allen and the Buffalo Bills hung 40 points on them just two weeks ago. Now no one is comparing Carson Wentz to Josh Allen; however, Wentz looked much better this past weekend.

Gotta get Past the Fourth Quarter

Watching the fourth quarter of the Colts and Ravens game was unbelievable. The Colts had stumped the Ravens and were the first team to score in the fourth quarter, to give them a 25-9 lead with 12 minutes to play. Lamar Jackson and the Ravens turned it on and were able to score two touchdowns in regulation and complete the two-point conversion on both touchdowns. They then came out in overtime and scored in five minutes to take the victory.

This game is going to sting for a little while for the Colts. There were some positives, though, like the play of Wentz and Taylor. Wentz was 25 for 35 for 402 yards and two touchdowns with no interceptions. Taylor ran the ball 15 times for 53 yards and a touchdown while also recording three receptions for 116 yards and a touchdown.

Defensively, the Colts had them right where they wanted them. The Colts’ defense has to be better in the secondary; they gave up over 400 yards passing, while the big guys up front only gave up 86 total yards on the ground. Reality check this Sunday, as the Colts are in the must-win territory if they want to compete for the playoffs.

Under the David Mills regime, this past week was the first time the team has covered the spread, moving them to 1-2 with Mills under center. In the single road game Mills has started, the Texans got beat 40-0.

The Colts have been on the road for the last three weeks. While they were not great at home to start the season, in terms of betting, they were 1-1 against the spread. The spread this week at -10 is a ton of points, and Indianapolis has not been the favorite one time this season.